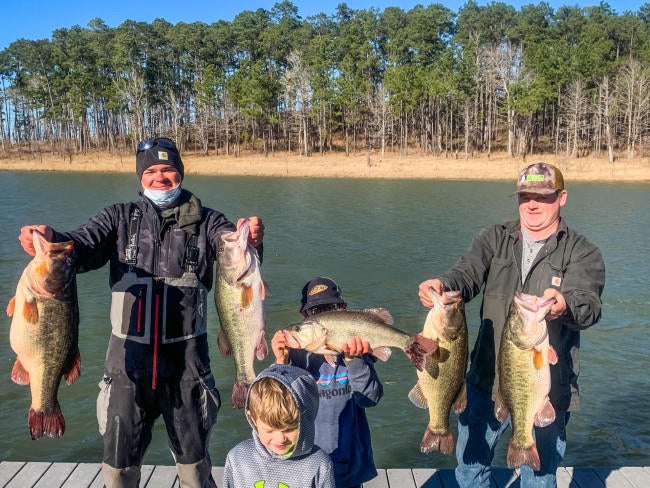 Mundy said he found his fish in practice but didn’t realize just how good his spot was going to be.

“You can’t look on the graph and see 40 pounds, but I knew I could have a good bag if they bit,” Mundy said. “It’s not guaranteed you’re going to roll up to your first spot and catch 30, much less 40.

“I caught the first four on a big crankbait and they busted up a bit,” Mundy said. “Then I pulled out a jig and caught the last one. I caught those five, all on the first stop, in about 20 minutes.”

Fishing a Strike King 8XD and a 3/4-ounce V&M The Flatline Pacemaker Football Jig, Mundy said he did all of his damage in about 17 feet of water, in the mid-lake region.

After catching five giants, including a 11-pound, 10-ounce largemouth, Mundy said he felt he could relax.

“I took it easy and went to some Plan B stuff to try to get my co-angler on fish, but it never worked out â€“ the wind got up pretty bad in the afternoon,” he admitted.

Weighing his fish as soon as he was allowed, Mundy said he was content to wait for the weigh-in to conclude before collecting his check.

“It’s the biggest bag I’ve ever caught,” said Mundy, who makes his living working on oil pipelines. “It felt good. I didn’t realize they were that big until I was checking on them to make sure they were doing alright in the livewell, but even then, I didn’t realize I had 40 pounds.”

The top 10 boaters finished the tournament as follows:

Ballard took home an extra $500 as the highest finishing Phoenix MLF BIG5 Contingency Bonus member. Boaters are eligible to win up to an extra $7,000 per event in each Phoenix Bass Fishing League presented by T-H Marine tournament if all requirements are met. More information on the Phoenix MLF BIG5 Bonus contingency program can be found at PhoenixBassBoats.com.

Michael Petras of Biloxi, Mississippi, won the Co-angler Division and $3,000 Saturday after catching a five-bass limit weighing 16 pounds even.

The top 10 co-anglers finished as follows:

Stoddard caught the largest bass in the Co-angler Division, a fish weighing in at 9 pounds, 15 ounces. The catch earned him the day’s Co-angler Big Bass award of $500.