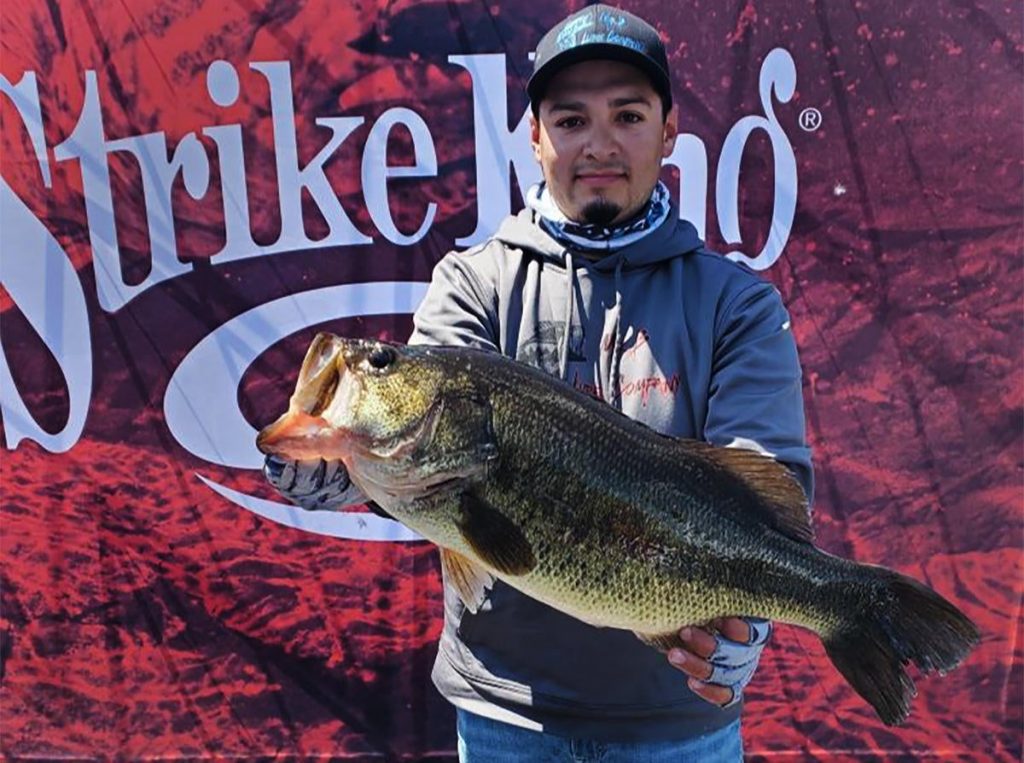 Strike King brought the action to the California Delta this past weekend with the third stop of the company’s four-event big bass tournament series. Though windy forecasts kept a handful of anglers off the water in Bethel, CA, those who pushed in their chips were rewarded with beautiful California weather and moderate wind for tournament day. Competition included first-time tournament fishermen as well as seasoned anglers, with everyone enjoying the “prize generous” and family-friendly format.

Throughout four weigh periods of the tournament, anglers brought a number of four, five and six-pound class largemouth to the scales.  Each period winner was awarded $750, with a total of $1,875 paid out each of the two-hour periods plus numerous prizes awarded from Lew’s, Strike King, Lucas Oil, Black Rifle Coffee Co. and Mammoth Coolers. Many participants were able to walk away with numerous drawing prizes for weighing in “keeper size” fish in multiple weigh periods.

Overall, it was local angler Michael Mulgado’s 7.44 pound largemouth that topped the leaderboard for the day. Mulgado made three trips throughout the day to the Strike King weigh-in at Russo’s Marina, but it was his last fish that he caught early in the final period that earned him the $5,000 “total boat makeover” from Lew’s and Strike King. Earning over $6,200 in cash and prizes for the day, Mulgado walked away from the event grinning ear to ear.

“I caught that fish flipping a watermelon candy jig in the grass off a main body of water,” stated Mulgado. “After I caught him, I had to just sit down and take a moment. Based on the size of the fish that were being brought in I thought maybe I had a chance to finish pretty high, but you never can tell at the Delta.”

Jason McKee, Vice President of Marketing for Lew’s and Strike King, stated, “We couldn’t be happier with the results and atmosphere of these events. We designed them to give recreational anglers as well as grassroots club and tournament fishermen a chance to come out and have a great time while competing in a fun, family-oriented atmosphere. Our group at the California Delta was a terrific example of what this is all about for Strike King, and we’re looking forward to our next event at Table Rock Lake in Missouri.”

Overall big bass winning angler Mulgado went on to add, “I really enjoyed this format. It allows anyone of just about any skill level to come out and be successful. I’m going to spread the word to my social media friends, and I’m looking forward to coming back and participating again in the future.”

Bill Egan and the team at Western Outdoor News assisted with planning, logistics and promotion for the event.  Safety and sanitation for the California Delta and all other events is provided by Mammoth PPE Products.

Anglers may register now for the final event at Table Rock Lake at https://www.strikeking.com/big-bass-challenge, where they will also find rules and information for the event. Anglers and local fishing fans are also welcomed to Pro Night on Friday, June 4th onsite at Port of Kimberling Marina from 4-7pm.  Strike King and Lew’s pros Bill McDonald and Greg Bohannon will me on hand to meet fans, talk fishing and offer a few tips and strategies.