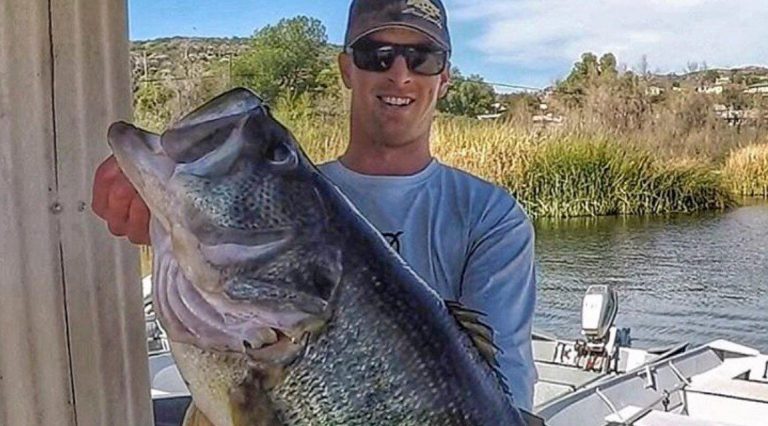 California has started to kick out its yearly dose of giant, surreal largemouth bass. SDFish.com reported this weekend that Greg Springer of Vista, Calif., landed a 16.3-pound largemouth bass from Lake Wohlford near Escondido on Friday, Feb. 26, 2016. Springer has already caught a 12-pound bass this year (see below). So catching double digit bass is not new to him, but catching a 16-pounder was definitely the catch of a lifetime for him.

The fish has as an impressive of a frame on a bass as we’ve ever seen. Long and equally wide.

The craziest part of his story is that this monster bass was landed while fishing from the bank. And it was his third attempt at catching the bass. He saw the bass follow his big swimbait the week before. Then he had it come up under an oversized topwater bait a few days later and then finally ate his 3:16 Lure Company glide bait on the second attempt in the area that day.

Greg Springer has been fishing with well-known big bass angler Ryan Block and was the angler that helped Block land his 16-pounder last year.  If you don’t already, we recommend you follow Greg Springer (@gspringer86) and Ryan Block (@arrr_block) on Instagram. They have some fun pictures and videos of fishing for giant bass with big swimbaits.

To read the full story of this catch and pursuit of this bass, the lake history and how a canceled fishing trip with Ryan Block ended up with him catching the fish of a lifetime, check out SDFish.com.

Here are a couple of photos of Springers amazing bass as well as his 12-pound beauty from earlier in the year. 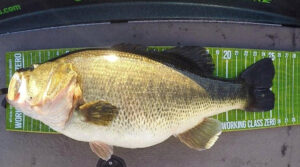