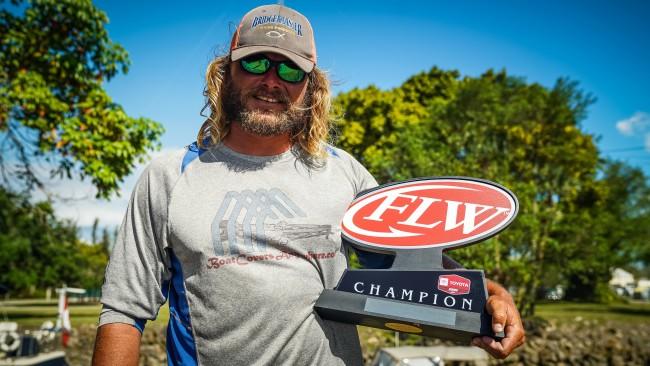 Pro Brandon Medlock of Lake Placid, Florida, brought a five-bass limit to the scale Saturday totaling 19 pounds, 4 ounces to win the three-day Toyota Series at Lake Okeechobee event in Clewiston, Florida. Medlock’s three-day total of 15 bass weighing 54-4 earned him the win by a 5-pound, 13-ounce margin and earned him a payout of $37,548 in the second tournament of the 2020 Toyota Series Southern Division season.

All three days, Medlock started on an outside reed line where bass were eating shad.

“I was practicing for a tournament a couple weeks ago and I caught some big ones out on the outside, but not very many bites,” said Medlock, who earned his third career Toyota Series victory on Lake Okeechobee. “So, as soon as the wind laid down in practice I went over there to check it, and it was bite after bite after bite. Those shad just came in there.”

Pitching and making short casts with a ½-ounce, white Medlock Double Guard Flipping Jig with a white Zoom Super Speed Craw was the ticket for the shad fish.

After corralling a limit each day, Medlock flipped reeds the rest of the time.

“The fish have all been behind the reeds for the past month – there’s not been anything going on the outside, that just started in the last two weeks,” said Medlock. “As hot as it is, I felt like that inside bite was dying. I felt like the fish were leaving that, so I concentrated more on the outer stuff.

“The first day I thought I was going to have 25 pounds, I caught probably 20 fish, but they were all little ones. I ran really shallow stuff that day, but the next day I went deeper.”

Going deeper turned out to be the key, and on days two and three Medlock flipped up multiple big fish from isolated reeds out past the main reed edge.

For his flipping attack, Medlock used a 3/8-ounce and a 3/4-ounce Medlock Double Guard Flipping Jig in black and blue. He tipped the 3/8-ounce model with a Riot Baits Little Fuzzy, and used a Zoom Big Salty Chunk as a trailer on the 3/4-ounce model.
Flipping the heavier jig on the outer reeds, Medlock opted for the lighter jig in shallower stuff.

“The water depth was the main deal there,” Medlock went on to say. “That 3/8-ounce jig is unreal for spooky fish. It doesn’t spook ’em. I can lay it down on super long flips and it lays down effortlessly.”

Buck took home an extra $1,000 as the highest finishing FLW PHOENIX BONUS member. Boaters are eligible to win up to an extra $35,000 per event in each Toyota Series tournament if all requirements are met. More information on the FLW PHOENIX BONUS contingency program can be found at PhoenixBassBoats.com.

Frashier brought a 7-pound, 14-ounce largemouth bass to the scale Friday – the largest fish weighed by a boater in the event – to earn the day’s Big Bass award of $135.

Andy Niles of Ocean Springs, Mississippi, won the Co-angler Division Saturday with a three-day total of 15 bass weighing 44 pounds, 7 ounces. For his win, Niles took home the top prize package of a new Phoenix 518 Pro bass boat with a 115-horsepower outboard motor, worth $33,500.

Co-angler Mike Garrett of Pensacola, Florida, caught just two bass on Thursday and one bass on Friday, but they were big ones.

Garrett weighed in a 7-pound, 11-ouncer on both days of competition, and both days earned the day’s Co-angler Big Bass award of $90. Garrett’s three bass totaling 16 pounds, 15 ounces landed him in 50th place.