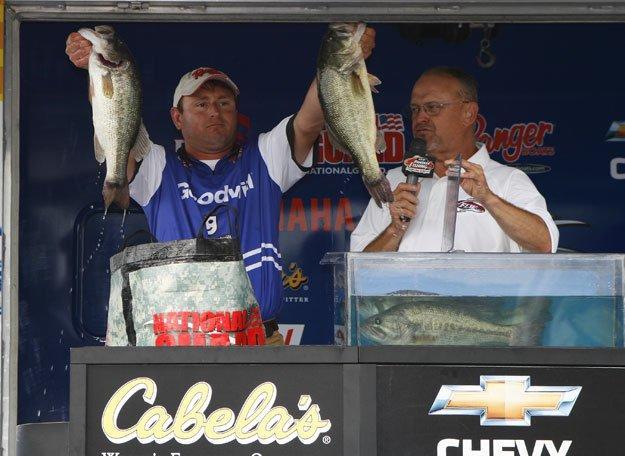 After three fish were in the weigh-in tank, McGuire already had enough weight to win his first FLW American Fishing Series title on Kentucky Lake. But he went ahead and threw two more 5-pounders in there for good measure. With a three-day total of 70 pounds, 8 ounces, McGuire beat Randy Haynes of Counce, Tenn., his closest competitor all week, by more than 10 pounds.

McGuire’s catch and the catch of all the guys in the top 10 was amazing considering the crazy water levels that have inundated everything on the Tennessee River. The lake came up to near record levels putting tens of thousands of acres of bushes and trees ordinarily dry this time of year under water. That gave guys a lot of cover to flip, and the crowd got to see countless bass weighing more than 5 pounds this week.

But the top three finishers all caught their fish cranking deep diving crankbaits on river ledges and creek flats. McGuire employed several crankbaits this week, but his staple bait was a Bomber Fat Free Shad with chartreuse sides and a greenish-blue back.

“I didn’t want another one of those second place trophies,” Mcguire said as Ron Lappin handed him his first champion’s trophy on the FLW AFS circuit. “I was glad to win, and it’s just been an awesome week. You know my co-angler is the fourth co-angler in a row that has won this event on this lake fishing with me the last day. After I caught my fish, I backed my co-angler in there and let him cast a while. After he caught his big fish, we ran back up to Moors and got a slice of pizza and just hung out till it was time to go.”

McGuire credited his win to just sticking with what he likes to do – “fishing out” as he calls it. He knew there would be a great flipping bite, and while he loves to flip when it’s right, he knew to win he’d have to fish to his strengths, which are finding fish offshore on river and creek ledges.

“I actually found my best spot with about 30-minutes left on the first day. I just caught two 3-pounders there, so it didn’t really show me what was there yet. But I’ve been so close and just missed finding the school to win in these events. That one spot is where I did most of my damage because it was loaded. I actually got a little freaked out this morning. A big fish hit, and I turned to my partner when it loaded up and said it was an absolute giant fish. Then my line just went limp. It broke me off. Then it jumped. Then it jumped again. Then it jumped another time. It was an 8-pounder, and when it jumped and took off, it took the entire school with it. I never got another bite.”

McGuire left the area and went on to fill out his limit and cement his win. He won $25,000 for a fun week of cranking up big fish.

Randy Haynes had 59-13 for three days. Mike Terry had 57-14 for three days and finished third. John Hopkins was fourth with 52 pounds, and Brien Vaughn was fifth with 48-4.For more coverage of the event, check out our buddy Will Brantley’s articles and photos at FLWOutdoors.com.
Next
Contact Us