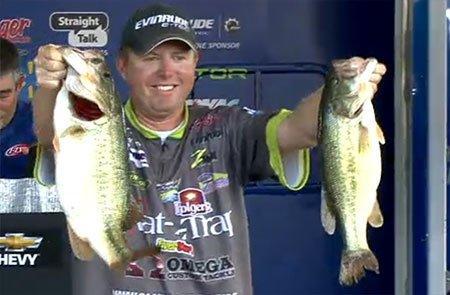 Casey Martin might be a rookie pro, but he’s no rookie when it comes to ledge fishing and he proved that this week winning the FLW Tour on Lake Chickamauga with a four day weight of 103 pounds and 3 ounces. Martin weighed an amazing 30 pound, 1-ounce limit on Sunday to win the event by more than 22 pounds. That put him on the record books as the second largest margin of victory and the second largest 4-day weight in FLW Tour history. Just to put it into perspective, Martin beat all but 4 anglers without even weighing his final day bag. His three-day weight bested 97% of the field’s four-day weight.

“I had two horrible days of practice to start. I almost gave up and went to Watts Bar, but I just said to myself ‘this is the Tennessee River. It’s June. There has to be a big school out there somewhere.’  I idled for 6 hours before I found a mega school the third day.

“The first day of the tournament I pulled up there and Mark Rose was there and I’ve got to thank Mark because I asked him if I could fish with him, and he said, ‘sure come in and we’ll share them.’ That second day with the fog delay I was in there with JT Kenney, Mark Rose, Anthony Gagliardi but for some reason they just really wanted that Picasso Bait Ball Extreme Rig. I don’t know if it was the fog or the low light conditions but I was getting bit every cast.

“I knew I had a spot that had big fish. The first two days I pulled in there and culled out a couple fish and the third day I just left it alone. I told Rob Newell I was going there instead on the final day and just see what I could do sitting on it all day and it was unbelievable.

“I had a 6 pounder and 5-pounder on at the same time in the first 10 minutes. The 5-pounder jumped and got off and I got the 6-pounder. After that it was on. I never felt like I really had it won until I got back to the dock because I knew what this fishery could do.  Michael Neal has already caught a 40-pound limit here this year so I knew what could happen. So I just kept catching them hoping I could get enough to pull it out.”