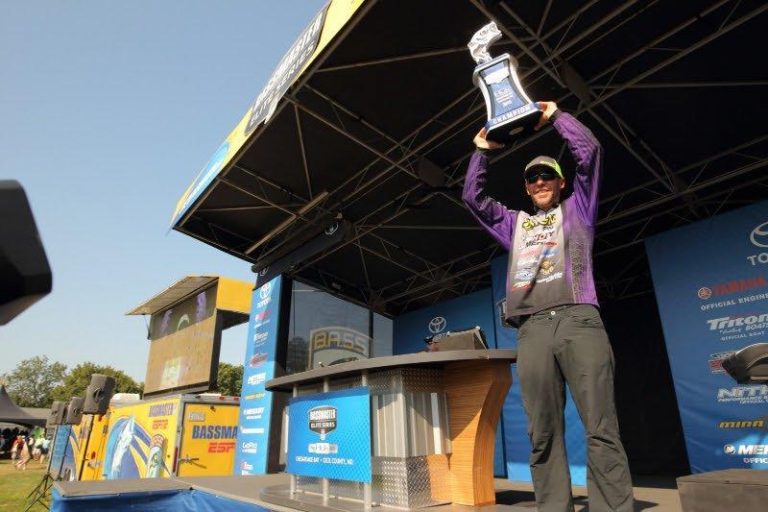 Aaron Martens could feel it all slipping away.

After starting Sunday’s final round of the Huk Performance Fishing Bassmaster Elite at Chesapeake Bay with a 5-pound lead, he was struggling as the clock ticked toward noon. And to make matters worse, Bill Lowen, his closest competition coming into the day, was off to a red-hot start.

But just when some watching on Bassmaster Live were likely ready to count him out, Martens landed a giant 7-pound, 2-ounce largemouth that helped him put together a final-day bag of 21-5. Both numbers ranked as the best of the tournament, and they helped Martens secure his second win of the season with a four-day weight of 70-2.

“That fish ranks right up there with any one that I’ve ever caught,” said Martens, referring to the bass that marked a dramatic turn for a day that had been extremely slow. “I was struggling, and I was starting to get a little grumpy. After I caught that fish, I wasn’t grumpy anymore.”

Martens started his day with a lengthy run downriver to a series of marina coves that were lined with dock pilings.

He had a tough morning and once trailed Lowen in the unofficial standings by more than 8 pounds. Martens had one three-hour stretch without a bite and then lost several bass in the 3- to 5-pound pound range once the fish finally started feeding.

He broke the ice with a 12-inch keeper and 2-pounder around 10 a.m. Then the big fish started biting.

“You can’t catch them until the tide is right,” Martens said. “I went to my best area about 20 or 30 minutes too early, and that’s why I lost those fish. They just weren’t quite ready yet.”

Throughout the week, Martens used a drop shot rig, a spinnerbait, a standard vibrating jig and a Chatterbait. The Chatterbait was the one that keyed his rebound Sunday.

He said the bait had a green pumpkin/blue skirt, and he trailed it with a Strike King Blade Minnow in the blue gizzard color pattern.

His biggest fish almost spit the bait out before Martens was able to get a hand on it.

“The bait came out while I was lifting the fish out of the water,” Martens said. “The fish was shaking its head the whole time, and I could see a hole tearing in its mouth where the hook was. That’s when I jumped on it.

“I lost several fish this week, but I had some crazy stuff happen that led to me catching big fish, too.”

It was Martens’ eighth career victory with B.A.S.S., and the $100,000 first-place prize pushed his career earnings to just over $2.5 million. He is the second Elite Series angler to claim two wins this year, joining Edwin Evers who won at Kentucky Lake and on the St. Lawrence River.

Lowen did all he could to catch Martens, putting a solid limit in the boat early and culling his way up to 18-5 — his best catch of the event. But Martens’ furious finish kept the Indiana angler from reaching his first B.A.S.S. victory.

“I can’t complain,” Lowen said. “I had a perfect tournament. I found the most perfect spot where I could catch fish on every cycle of the tide. The only time I couldn’t catch them was when the tide got slack.

“I went out there and left it all on the lake. I have no regrets.”

On low tide, Lowen caught most of his fish around shoreline laydowns. When the tide was high, he fished over a matted bed of milfoil grass.

“I spent the week fishing the way I like to fish,” Lowen said. “I had a flipping stick in my hand quite a bit. I caught some fish on a [Tightlines] UV Hog earlier this week, and I caught a lot of fish on a little Ohio River spinnerbait that I’ve been using since I was about eight years old.

“That was pretty neat, catching them on a bait I’ve been using most of my life.”

Besides scoring his second victory and fourth Top 5 finish of the year, Martens stretched his lead in the Toyota Bassmaster Angler of the Year standings to a commanding 69 points over Justin Lucas.

With one tournament left on the regular-season schedule – Aug. 27-30 on Michigan’s Lake St. Clair – Martens said he’ll have to decide if he wants to play it safe the rest of the way to protect his AOY lead or go for another win.

After the St. Clair event, the Top 50 remaining pros in the AOY standings will take part in the Toyota Bassmaster Angler of the Year Championship scheduled for Sept. 17-20, in Sturgeon Bay, Wis. The event will have a $100,000 first-place prize and total purse of $1 million.

“I’ll probably go and try to win it,” Martens said. “That’s the way I like to do things.”