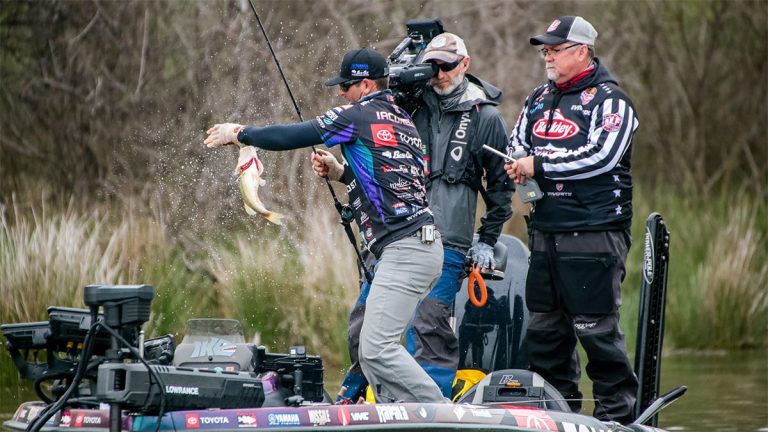 Major League Fishing (MLF) announced today the return of the 2020 Bass Pro Tour on June 7-12 with Heavy Hitters featuring a $745,000 purse and the full field of 80 Pros. The 2020 Tour will conclude July 10-15 on Lake Champlain after five Stages. For the safety of all involved, fan events and gatherings are cancelled for the remainder of the season. This revised schedule permits MLF to deliver an additional 100+ hours of live-action sports as well as meet television production deadlines to fulfill sponsorship agreements despite the unprecedented season. On March 23rd following three successful Stages, MLF paused the Bass Pro Tour in an abundance of caution due to the coronavirus pandemic.

“After working with state, local, and Public Health officials, we feel we can return to the water for two final tournaments in 2020,” said Boyd Duckett, MLF Co-Founder and pro angler. “Fishing is an inherently socially distant sport and while we will miss seeing our fans face-to-face, the Bass Pro Tour can deliver the drama of live-action sports to fans, while participating responsibly in a phased approach to help restart the economy.”

Heavy Hitters presented by Venmo will take place on Lake Tohopekaliga (Toho) and the Kissimmee Chain two weeks later than originally planned, June 7-12. No longer a mid-season qualifier, the event will feature all 80 MLF Pros in a traditional six-day, Bass Pro Tour format while still featuring an untraditional $745,000 purse and full-field payout. Heavy Hitters will serve as Stage Four toward the season-long Bass Pro Tour Points Championship, awarded to the angler with the most points at the conclusion of the season.

“As an angler-driven league, we worked with the Pros to identify a schedule that preserves as many opportunities as possible for our guys to compete and receive a paycheck during this unprecedented time,” said Jim Wilburn, MLF President and CEO. “Our media-centric format and exceptional production team enables us to create significant exposure for our field with over 550 hours of original programming via livestream, Discovery Channel, CBS, CBS Sports, and Sportsman Channel.”

As the economy begins to reopen in Florida, Experience Kissimmee looks forward to welcoming Major League Fishing to their community.

“We are thrilled to welcome back Major League Fishing to Kissimmee for another successful event,” said Kissimmee Sports Executive Director John Poole. “While the destination is following the Florida governor’s plan to reopen in phases, we are grateful to have the opportunity to provide both live and recorded television content for viewers across the country to continue experiencing Kissimmee from home.”

The 2020 Bass Pro Tour will conclude with the Evinrude Stage Five presented by Covercraft July 10-15 on Lake Champlain hosted by Experience Vermont. The abbreviated five-stage Bass Pro Tour encompasses the race to qualify for the 2021 REDCREST Championship and win the overall 2020 points race. After the General Tire Stage Three presented by TrueTimber on Lake Fork, Ott DeFoe leads the field with 227 points, while reigning Champion Edwin Evers sits near the Elimination Line at 29thplace with 146 points.

“I’m glad that we’re able to return to fishing at this point,” said DeFoe. “Five stages are better than three and the fisheries that we have ahead of us are outstanding fisheries that will make for great contests. Despite being only five stages, this is a very diverse schedule and we will take what we can get in what has turned into an unprecedented season.”

“I’m excited to get back to fishing,” said Evers. “It’s in our blood and for me to have the National Anthem go off and get back in the boat and compete against the best guys in this race for a REDCREST qualifier will be fantastic. Over these last few weeks, this competition has been missing in my life!”

With the remainder of the 2020 season cut short due to the worldwide pandemic, MLF continues to work with 2020 host Bass Pro Tour hosts – Greater Raleigh Sports Alliance, the Fox Cities Convention and Visitors Bureau, and the City of Ogdensburg – for future events. As announced last month, Grand Lake O’ The Cherokees will serve as the competition waters for REDCREST 2021 hosted by Tulsa Sports Commission, February 23-27, 2021 with the inaugural REDCREST Outdoor Expo February 26-28, 2021.