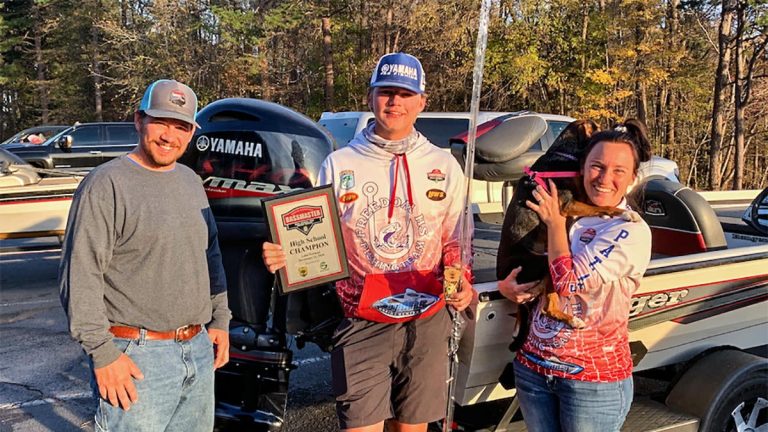 High school angler Hunter Keller understands his mom, Ashley, and dad, Dusty, need to live within the family’s financial means – but they’ve always done all they can to support Hunter’s love of competitive bass fishing.

Rather than buy a pricey fiberglass boat, they chose a tough 18-foot aluminum boat powered by a 115-horsepower Yamaha V MAX SHO ®. It’s a decision that recently paid back $10,000 in Yamaha Power Pay contingency money after Hunter’s dad, Dusty, registered for the Yamaha Power Pay program.

“When Mom got the email confirming our sixth place finish at the high school national championship was good enough for a $10,000 Yamaha Power Pay bonus, she was screaming and in tears of joy. She’s my biggest fan,” said Hunter. “Dad read about the new Yamaha Power Pay program right after it launched, and knew we had to make sure we signed up and thank goodness we did.”

A self-described baseball hat collector, 17-year old Keller from North Carolina says the Yamaha hat that came in the mail after his dad registered for Power Pay played a major role in their success at the 2020 Mossy Oak ® National Championship on Kentucky Lake in late October 2020.

He and partner Daniel Brackett, with dad Dusty as their boat captain, stayed purposely close to the Paris Landing launch and weigh-in area in their smaller vessel, and used a 3/8-ounce fish head dressed with a Keitech ® Fat Swing Impact to catch the majority of their three-day weight.

“I took like a dozen hats to that tournament, and the night before, I was studying which one I’d wear to start the tournament and chose the Yamaha Power Pay hat. Once my partner Daniel and I finished sixth, I never took it off. Then I won the next two tournaments I fished in that hat,” recounted Keller.

The fact is, Hunter probably spent more time laboring over what hat to wear than what outboard they’d buy. “We knew we wanted a Yamaha and wouldn’t have bought a boat without a Yamaha on the transom. Now, after this $10,000 Power Pay bonus, there’s no doubt. We’ll never own a boat without a Yamaha,” concludes the up-and-coming fishing talent who will attend Erskine College ® on a fishing scholarship next year.

The great thing about the Yamaha Power Pay program is anglers don’t have to win tournaments to take home Power Pay cash. Anglers simply have to be the highest finishing registered participant in a Power Pay supported tournament. Power Pay is not just for bass anglers, it also includes eligible saltwater, walleye, high school and college anglers (over the age of 18) through hundreds of events.

For more information, complete terms and conditions or to register for Yamaha Power Pay, visit yamahapowerpay.com or email Chip with questions at Chip@DynamicSponsorships.com.