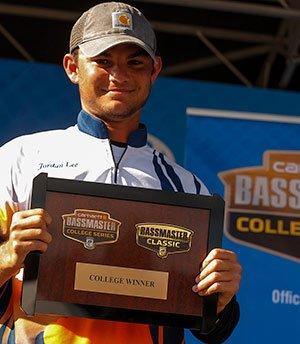 Jubilation and devastation. That was the theme revisited Sunday, the final round of the Carhartt Bassmaster College Classic Bracket.

After the third day of a bracket-style elimination competition on Grand River in Michigan, Jordan brought five bass to the scales that weighed 12 pounds. Powell brought in four bass for 9-3.

As the victor, Jordan became the one collegiate competitor in the 2014 Bassmaster Classic out of Birmingham, Ala., Feb. 21-23, on Lake Guntersville. Jordan also received a check for $5,000 from Carhartt. Matt Lee was on stage to hand over the keys to a fully rigged Toyota Tacoma to pull a Skeeter FX20 bass boat powered by a Yamaha SHO 250 outboard. Both are wrapped in Auburn University colors.

â€œIt’s a dream come true to get to fish the Classic,â€ said Jordan, a senior majoring in marketing. â€œI’ve stayed focused all year and tried my best to be right here. I’m glad my family and all of my friends will be there when I fish the Classic. This is what every college angler wants.â€

Jordan also will receive entries for the Bass Pro Shops Bassmaster Opens series of his choice. For bringing in the largest bass during the three-day tournament, a 4-1 on Day 1, he also won the Carhartt Big Bass prize of $500.

Jordan’s victory culminated a year of intense competition at the collegiate level. Anglers qualified for the Classic Bracket by working their way through divisionals and a championship. Only eight anglers made it to the finals on Grand River to compete for the college berth.

The prizes in hand, Jordan was painfully aware of how his close friend and tournament partner, Powell, Powell must have felt to be so close to a Classic seat and miss out.

â€œI’ve fished with Shane since my first semester, so I know exactly how it feels to be in his position,â€ said Jordan. â€œIt’s tough. And nothing anyone says to you can make you feel better. It’s been tough for me the last few years, coming in second.â€

Jordan said the secret to his success Sunday was settling down and going fishing with his mind fully focused on what he had to do.

â€œI fished well today,â€ he said. â€œI made the right choices and picked up a spinnerbait when I needed it, and I used a frog when I needed it today. It helped that I caught five fish in the first hour and a half. That got my confidence up, and all I had to do was cull up.â€

Jordan used a 3/8-ounce white Booyah spinnerbait with a trailer hook when the wind was up. â€œI knew it wouldn’t work if the water was slick calm. I would skip it back to the docks. I think the small blades and the No. 2 trailer hook â€” those were the key. â€

Jordan stayed in the river’s Spring Lake area most of the day. Thirteen of the 15 bass he weighed in over three days came from that one area.

â€œIt had depth and grass and milfoil,â€ Jordan said. â€œI knew it had a population of fish. I put my trolling motor down and would go about 600 yards. I never found a sweet spot. The biggest key for me was covering a lot of water.â€

Powell caught the day’s largest bass, a 4-pounder, but came up one bass short of a five-fish limit.

Powell said he caught a fifth bass, but it measured 13 7/8 inches, just shy of the 14-inch minimum limit.

â€œI knew I had to have five fish every day to win this. I left the door open for Jordan when I only caught four.â€