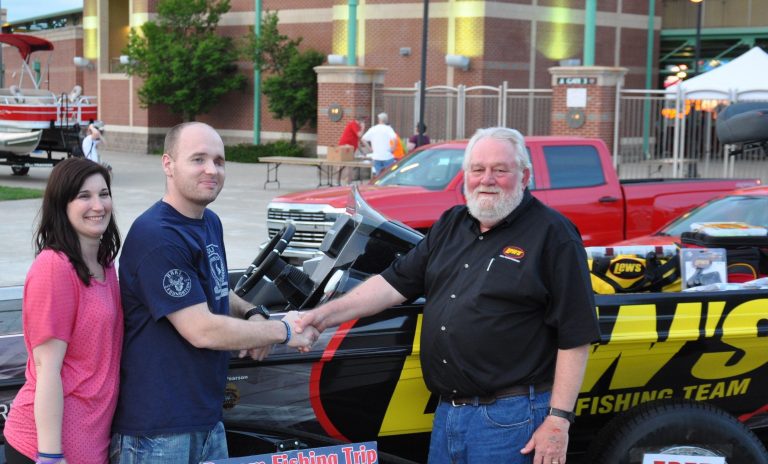 A joint fundraiser by Lew’s and the Missouri Fraternal Order of Police to benefit wounded Springfield police officer Aaron Pearson concludes Sunday, May 31. That means there is still time to support the worthy cause and have a chance to win the fully rigged 2015 Ranger bass boat grand prize or dream fishing trip with Hank Parker or Jason Christie.

When 30-year-old Pearson was shot in the head while on duty last January, his medical prognosis was gloomy. However, his family was more optimistic knowing the loved one’s spirit, and it turns out they had the best insight.

At a recent Springfield Cardinals minor league baseball game, Officer Pearson and his young son tossed the ceremonial first pitch. Lew’s CEO Lynn Reeves was in the stands with other company associates and he couldn’t have been any prouder of the moment.

Aaron Pearson and his son made the first pitch at a recent Springfield Cardinals baseball game. Lew’s CEO Lynn Reeves was in attendance at the ball game to honor Pearson and help with the fundraiser on his behalf.

“I couldn’t tell you where the ball went, I don’t think the pitch itself was on anybody’s mind,” Reeves said. “Instead, all eyes were on Officer Pearson, the man who was standing there on the field as if to symbolize the amazing results when love, faith and medical skills come together. No doubt, Aaron is a living miracle man.” 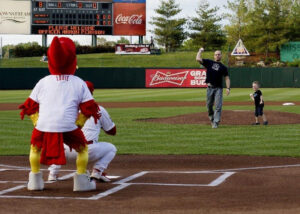 Reeves went on to say that the challenges for the officer and his family are far from over. Therapy, reconstructive surgeries and medical attention will be ongoing for Pearson for years to come. That means the medical bills will continue too, and it’s too early to determine if he will be able to work again.

“The Officer Pearson Boat Raffle is a win-win for everybody,” Reeves reminded. “The Pearsons benefit from the proceeds, while ticket buyers get a chance to win
outstanding prizes. The Ranger Z520c has everything on it, including a 250 HP Mercury outboard, electronics, trolling motor and Power Poles. It’s worth more than $75,000.

“And you can’t put a price tag on the value of the dream fishing trips with celebrity angler Hank Parker and top bass tournament pro Jason Christie. These two great guys simply wanted to help out Officer Pearson. We hope you’ll want to do that too by purchasing multiple tickets in these last few days they’re available,” he added.

The fishing trip prizes are for a winner and guest, with the fishing date to be mutually agreed upon by all.

Raffle tickets cost $20 each and can be purchased online. The tickets and full details about the prize packages, which also include rods, reels, lures, tackle bags and more, can be found at www.OfficerPearson.com. Ticket availability ends midnight CDT, May 31. The Team Pearson Boat Raffle is void where prohibited.

The fundraiser began in mid-February. A third-party accounting firm will conduct the prize drawing on June 5 to select the winners. Winners will be notified directly on that date and their names will also be posted on the Officer Pearson web site.