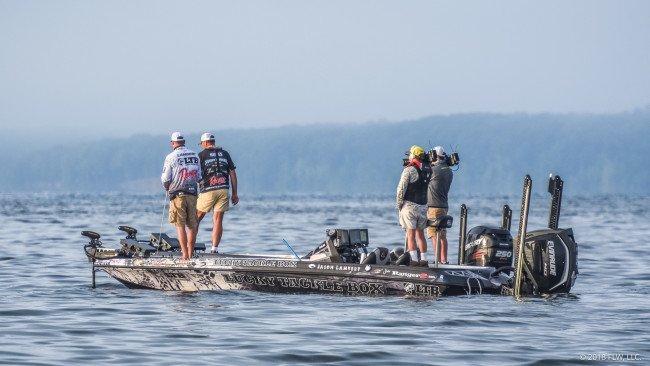 UPDATE (5/25/18 at 1:30pm) : Randy Haynes has released a statement explaining and apologizing for his sudden withdrawal from the tournament on day three of competition. Below is his Facebook post:

Jason Lambert boated a 30-pound, 8-ounce limit to take a seemingly unsurmountable 19-pound, 3-ounce lead on the third day of FLW Tour event on Kentucky Lake besting his own one-day record for the FLW Tour on Kentucky Lake. And Lambert had a 9-pound, 2-ounce bass in his bag that he caught on FLW Live that morning. But that won’t be what bass fishing fans will remember from this tournament. It will be the bizarre events that started the morning which led to the tournament leader at the time, Randy Haynes, withdrawing from the event and heading home only an hour into the day.

Haynes was leading the bass fishing tournament after two days with a two day catch of 46 pounds, 2 ounces ahead of Lambert by just 2 pounds, 4 ounces. Haynes and Lambert both knew that their day one catches both came off the same small spot on a community hole on the north end of Kentucky Lake. Haynes sat on the spot for 7 hours on day one not knowing that Lambert had already been there before him and boated his 24 pound catch that day. On day two, Haynes spent the whole day again on the ledge to get his weight. Lambert ran further south and only got 5 bites the entire day.

The duo launched out Saturday, day three, as boats 1 and 2. Haynes said he knew Lambert’s boat was a bit faster than his and if Lambert didn’t respect him as the leader of the tournament it would be a boat race to the spot. Lambert beat Haynes to the spot by a few seconds and the two commenced to fishing literally rub rail to rub rail on the ledge, that requires one specific cast this week to get bit. There was a heated, but civil, discussion over respecting the leader’s water, sharing the water, etc. Lambert began boating bass first and quickly put two in the box while losing a third fish.

Haynes, in a surprising move, turned to Lambert and said, “Tell you what. You can have it. I’m fixin’ to go to the damn house. I’ve got to go to work anyhow.”

Haynes strapped his rods down, pulled his trolling motor and ran all the way back to the Kentucky Dam Marina and put the boat on the trailer, withdrawing from the tournament as the previous day’s leader and passing on the chance at the $100,000 first place check. An unprecedented move in professional bass fishing. And one can’t help but wonder if Haynes did it as much to make a statement as to just avoid unnecessary aggravation.

Haynes later talked with FLW’s Rob Newell, and Newell shared Haynes thoughts on his decision on FLW Live. Haynes stated he was just old school and it was a matter of sportsmanship where you respected the leader and where he was fishing. He further went on to say that it was not a personal beef, but that if that was the way you had to compete nowadays in tournament fishing, then he was out. He hoped he hadn’t embarrassed his sponsors by deciding not to play those games in a professional fishing tournament. And he was happy that he had a good business and family where he would rather spend his time. 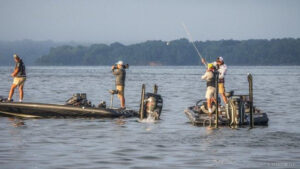 Lambert said on FLW Live that he didn’t have anything bad to say about Randy Haynes and called him the best ever at ledge fishing. He also pointed out that he’s known Haynes for 20 years fishing against him on Pickwick and Kentucky Lakes.

While technically no rules were broken, this is the part of tournament fishing that has become very disenchanting for many of us. And why many of us are tired of watching TVA events. This unfortunately is not an isolated event. I watched this same thing happen in 2016 when Terry Bolton was leading going into the third morning and guys started “crowding in” where he was fishing.

The culmination of other instances like this may explain why Haynes was finally so fed up with it this morning. Haynes finished the event in 12th place while not even catching a bass the third day. He also stated that he plans to fish the final FLW Tour stop at Lake St. Clair as a fun trip with friends.