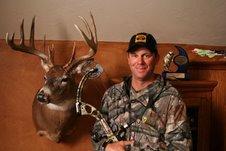 He takes those same winning intangibles to the deer woods â€“ and the results have been similar.  Trophies hang on the wall.

â€œI have a fascination with fish and wildlife.  It doesn’t matter whether it’s pheasants, squirrels â€“ or whatever â€“ but mature whitetail bucks captivate me in a different way â€“ on a different level — because they are so unique, cagey and smart.  Their personalities and daily habits are as unique as the antlers on their heads.  To me, they are the toughest big game animal to harvest in North America,â€ says VanDam.

The supreme challenge whitetails offer has carried Kevin to Montana, Texas, Illinois, Manitoba, Saskatchewan, Kansas, and of course, his home state of Michigan.  He’s tagged big bucks in most of those places.  But the #1 ranked angler, gives Kansas the #1 ranking for deer hunting.  The Jayhawk monster shown in the accompanying photo goes far in explaining why.  It gross scored 173.  He downed it at 275 yards with a RemingtonÃ’ 7mm STW on a hunt with his brother-in-law Russ in Brown County, KS four years ago.  He credits many hours at the rifle range for allowing him to make the long shot.

â€œI’m not sure there is a bad place in Kansas,â€ grins VanDam as his mind wanders off to the perfect scenario in the Sunflower State.  â€œIn fact, I can think of the perfect tree to be in right now in early November. There’s a 300-acre block of timber with a ravine cutting through it from East to West, and the deer funnel into it by following fencerows.  The tree overlooks that ravine.  Put me in that tree with a cold-front moving through, cloudy skies, a falling barometer, northwest wind, and air temps ranging from 30 to 55, and I’d sit there from dawn to dark â€“ waiting â€“ intensely,â€ reflects KVD.

VanDam who hunts with a variety of rifles and a PSE Dream Season bow admits that the 12-hour days in a tree stand can at times become too intense.  â€œWhen I’m in Kansas â€¦that’s my time.  But I can’t say it’s relaxing.  My intensity and drive in that deer stand is pretty much exactly like a day of competition on the water.  I don’t call a ton with rattling horns or grunt calls unless I’m trying to draw a deer in closer that I can see in the distance.  It’s mainly a lot of long hours sitting silent — waiting and watching.â€

â€œI’ve been hunting so long, with so much intensity that the entrance of my sons Nicholas and Jackson into the sport probably saved me from burn-out, or at least returned me full circle to the fun side of deer hunting again.  I absolutely love teaching them about deer behavior, body language, and the daily habits of deer â€“ just everything I can about whitetails. That time with them is definitely the most fun part of deer hunting â€ admits VanDam who won his first Toyota Tundra Bassmaster Angler of the Year title 17 years ago.

â€œI fish professionally to make a living, but I won’t kid you â€“ someday when I stop fishing competitively, I dream about extending my career by getting involved in the deer hunting segment of the outdoor industry,â€ concludes VanDam.

â€œMy wife Sherry wanders why I don’t hunt elk, mule deer, moose, whatever, and all I can say is I’m consumed with whitetails in a hard-core kind of way.  They captivate me,â€ says Kevin.