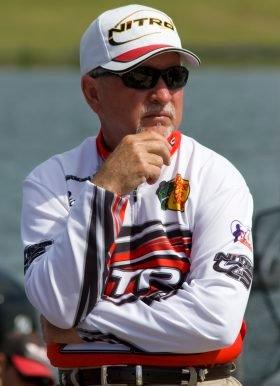 This time a year ago, Stacey King of Missouri was still recovering from triple-bypass surgery to repair blockages in his arteries that sidelined him for the almost all of the 2007 tournament season.

After routine fears and concerns about his health abated, King’s attentions turned to two things: maintaining his rehabilitation program to regain his strength and establish new habits, and getting back in his Nitro boat to pick up a rod to fish for anything.

Heart disease and high cholesterol run in the family, so King’s always been aware of those potential problems. Early last year, a checkup revealed blockages in three arteries that couldn’t be repaired with angioplasty stents.

King underwent surgery in March and by mid-summer was tooling along with his rehabilitation program, looking to get back in the late-season FLW Tour events or others that would help continue his return to the tournament scene.

He was able to fish a few events late in the year. Now, in his 20th season, he’s back on track, fishing the FLW Series BP Eastern Division and feeling pretty good.

“I feel old, or I’m beginning to feel older, but I can still go out and compete,” King said. “I’m thankful they found my problem and corrected it when they did, and I have a few more years to get out and fish and compete.”

When he was sidelined last season, King kept up with the tournament results and maintained a focus of getting back into fighting trim to rejoin his fellow anglers.

“I was watching it all along,” he said. “I knew it was something I had to do and consigned myself to the fact I had to get it done. I didn’t let it bother me. I was anxious to get back fishing again, just fishing in general and not competition. That really helped me in rehab, to get to the point where I could just get in the boat and go fishing at home. I think my rehab came along a lot faster when I could that.”

One of the three blockages was in the “widow-maker” artery that snakes down the front of the heart. It’s the left anterior descending artery, a main one that has several branches and if completely blocked usually leads to a massive heart attack.

King didn’t have a heart attack, but the main artery is so critical his physicians recommended immediate surgery. Once the bypasses were in place, the rehab program included walking to help build strength, changes in eating habits and a gradual return to normal activities.

Because King was pretty fit to begin with, his rehab program didn’t sap his energy as much as it might in someone who is out of shape. He’s a longtime hunter and, admittedly, a roamer among the hills and hollers of his native Missouri. King’s also an avid bird dog trainer, so the return to physical activity was welcomed.

“I can’t compete at the level some of these younger guys do, I know,” he said. “There’s a physical difference when you’re talking about an 8-day event, four days of practice and four days of the tournament.

“My bones get to aching and creaking, and you think about taking a few ibuprofen. These younger guys don’t think a thing about it and I used to be that way, so I feel that’s a bit of a disadvantage. But I also think the years of experience help you, too. I sometimes can slow down and fish a little more thoroughly.”