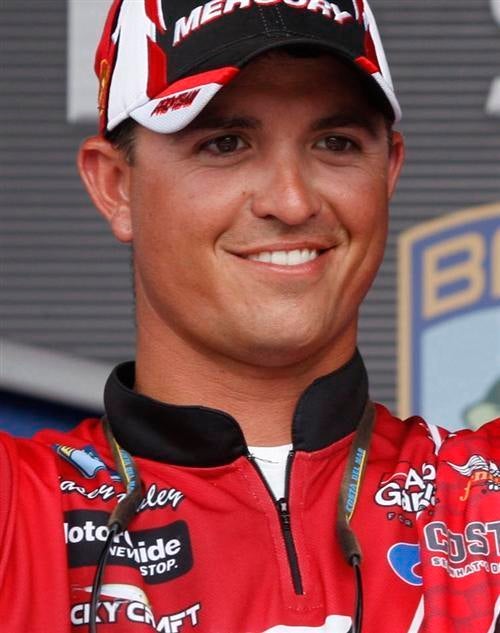 Ashley enters 2011 as his sixth season of fishing the BASS tournament trail. Over the course of the 54 events he’s fished to date, the Donalds, S.C. angler has had nine Top 10 finishes, including a win on Virginia’s Smith Mountain Lake. The earnings during his young professional bass fishing career have already neared the half million dollars mark.

“We’ve had a lot of anglers singing the praises of Jewel baits over our 20-plus years in this business, but Casey brings that meaning to a whole new level,” said Jewel president Gayle Julian, having fun with the fact that Ashley is also pursuing a country music career. “He’s an excellent angler who is really good with a jig rod in his hands and that makes him a perfect fit for our interests. We’re pleased to welcome him to the team.”

Ashley does indeed have a history with Jewel, having used the company’s 7/16-ounce Eakins Jig to record his Smith Mountain Lake victory in 2007.

“The Eakins Jig in Peanut Butter and Jelly color is my go-to bait, my money lure,” Ashley explained. “I didn’t want to use a drop-shot or any of the other deep water techniques on Smith like the other guys were doing, so I just picked up my favorite jig and went fishing. It worked out well for me in Virginia, and has in many other places across the country, too. I hate to lay down my jig rod.”

Although Ashley is not fishing in next month’s Bassmaster Classic being held on the Louisiana Delta, Feb. 18 – 20, he does have a prominent role in the event. He has agreed to sing on the Classic stage in the New Orleans Arena before the weigh-in begins on the tournament’s first day, Friday, Feb. 18.

Likely to be among his selections is “I am a Fisherman,” a song he recorded in 2008. Ashley says he looks forward to visiting with fishing and music fans alike while he spends time in and around the Jewel booth during the Bassmaster Classic Outdoors Expo. The expo is held at the Ernest Morial Convention Center in conjunction with the 2011 Classic.

Ashley joins a Jewel pro staff that includes several of fishing’s top names, including Mike McClelland, Jeff Kriet, Jim Eakins, Troy Eakins, Larry Nixon, Kevin Short and Scott Rook. McClelland, Kriet and Rook are among a total of 50 anglers who have qualified to compete in this year’s Classic.

For more information about Jewel Bait and its entire pro staff, visit JewelBait.com.