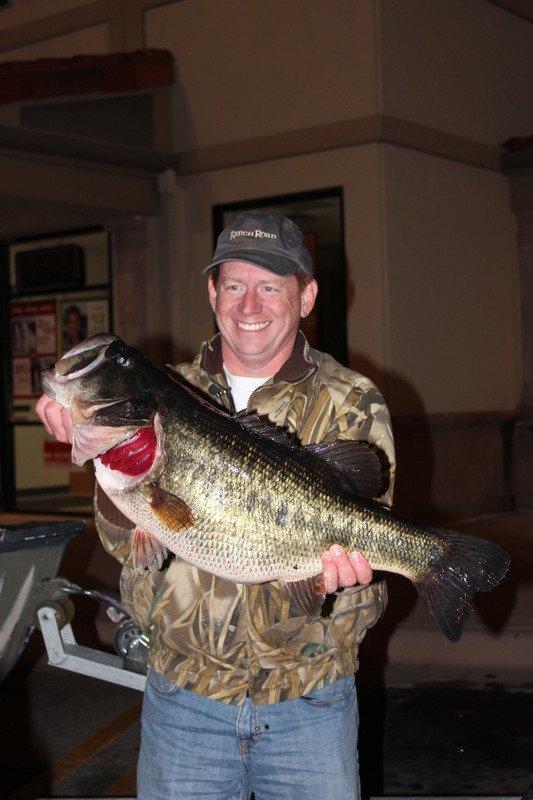 So what drives us as bass fishermen, as anglers, as fish heads? Why do we battle the elements, fight the wind, deal with issues with equipment all for little green fish? For that one bite. That one fight. That one moment that changes it all.

T.J. Nissen of Austin, Texas now knows that feeling. That’s because Nissen did the unthinkable and caught a 16-pound bass out of his local Lake Austin. Nissen doesn’t live on the lake but has frequented it for most of his life, having lived in Austin since he was born.

T.J. and his son Kyle, a student at Texas State and member of their college bass fishing club frequent the lake often, and the father and son duo discovered a unique situation on the lake a couple years ago.

“We caught the bass really good a few years ago on crankbaits when they drew the lake down for homeowners to work on their docks and help eradicate the grass that gets so thick in the warmer months,” Nissen said. “We figured out how to catch them fishing around rocks on the lake and my son has actually caught three double digit fish now out of the lake. One we thought was a Share Lunker at the time but turned out to not be quite 13 pounds.”

Nissen’s 16.03-pound bass is actually the fourth Toyota Share Lunker bass caught this year, but easily the biggest. His bass caught more than just a trip in the Texas Parks and Wildlife Department Tundra, it also took down the Austin Lake Record in the process. The former record was 14.35 pounds.

Nissen recounted the story to Wired2Fish this afternoon.

“The lake is probably 15 feet low if I had to guess,” said Nissen. “So I can’t get my big 21-foot Skeeter boat on the lake right now. Instead we had to put on rubber boots, and drag and pull a 12-foot V-bottom aluminum boat to the water and hop in.”

Nissen and his partner Kevin headed across the lake to fish crankbaits on some rocks that had been very productive for Nissen and son on their previous trips. Nissen was fishing Bomber Fat Free Shad crankbaits in Citrus Shad on 12-pound Seaguar Invis-X fishing line.

Early into the fishing Nissen hooked two nice hybrid stripers and one small keeper largemouth. The fishing was mostly slow after that and as it started to get dark they were using their trolling motor along with their big motor to try to get back across the lake before it got dark. They got back a little quicker than expected, enough time to fish some more on that side of the lake in the make shift boat.

“I saw some similar looking rocks and headed over there, but I couldn’t touch bottom with my crankbaits,” Nissen said. “I figured it was a bluff bank so I started looking around for something different. It’s just like it always is with bass fishing. You’re just trying to find something a little different in an area.”

What Nissen found was one dock with extremely long legs that were still in the water even with the lake drawn down. The legs are probably in 40-feet of water when the lake is at full pool. So Nissen fired his crankbait back parallel with the dock posts and the fish clobbered the crankbait. But when he rared back on the rod, it didn’t budge and he figured he hung a rock.

About that time, the bass shot out into the middle of the lake stripping drag like mad. When she first surfaced, Nissen and partner could tell it was a largemouth, so he began playing the fish down, loosening his drag and thumbing her on quick runs.

Her first pass by the boat and his partner saw the fish had one of the available six trebles in her mouth. Nissen was a nervous wreck hoping that as he changed rod angles and directions she wouldn’t pop loose.

On the third pass, Kevin nabbed the bass and pulled her aboard.

The fish weighed 16.2 pounds on their digital scale, and Nissen thought something had to be wrong with the scale.

“I’ve never seen a 16-pound bass, much less caught one,” he said. “I had no idea what I was looking at. I always thought those big fish pictures looked fake. Now mine does too!”

Nissen started calling in the support troops. He called TPWD and they dispatched the Toyota Share Lunker Tundra to come get the fish but it would be a 4-hour wait. Meanwhile, family and friends started showing up with 100-quart coolers, Please Release Me treatment for the fish, extra clothes and food for the wet and cold fishermen.

They had been wading into the water to keep the fish alive in the lake, even though it got down to 41 degrees after dark and Kevin in shorts. The funny things we do with fish on the brain.

Nissen’s son drove all the way back from Texas State that night to share in his moment.

“I told my son we’ve fished a lot together, and he’s had some great double digit bass, but I finally one-upped him,” Nissen said. “My son said, ‘yep, but I’ve still done it three times!'”

Only a father and a fisherman can truly appreciate that! 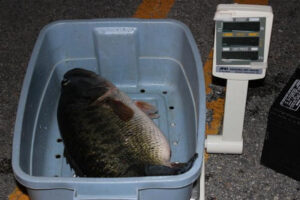 Fact is Nissen has probably one-upped about 40 state records in the process even though the bass will be in the high 40s for top Texas fish.

And he apologizes if you’re in the Cabela’s near Austin and can’t find any Citrus Shad colored Fat Free Shads. He bought them all in anticipation of this trip.

We’d say that bait’s sales are going up around the lake!

“This is why you bass fish,” Nissen said. “That one catch that you wait for your whole life. This is a buzz that will never go away!”

Great Catch T.J. Thanks for sharing! You’re Wired2Fish for sure!

Thanks to Mark Jones at Lonestarbass.com and Trey Epich at austinbassfishing.com for the heads up!