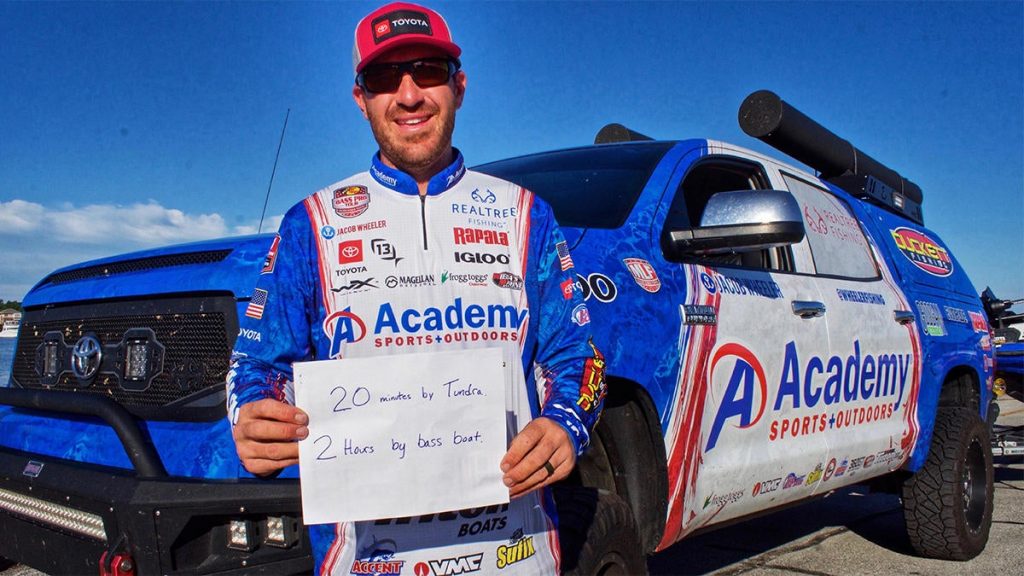 Wind and waves have been a big part of the conversation for the Covercraft Stage 5 Presented by Abu Garcia, as they are anytime professional bass fishing meets The Great Lakes. Fortunately for the Bass Pro Tour competitors, officials, and media members MLF has implemented a special trailering policy for this week’s competition.

Anglers can launch at any public boat launch within the massive tournament boundaries on Sturgeon Bay, Green Bay and Lake Michigan, and can also put their boat back on the trailer and drive to a different boat ramp during competition hours if they so choose. BPT pros were informed of this policy before practice began and formed their game plans accordingly.

Team Toyota pro Jacob Wheeler is one of many anglers who appreciates the policy for several reasons, namely for saving his equipment and body from the waves abusive toll. The wind has been steady and at times howling from the North throughout practice and the start of Stage 5 competition.

“The reality is bass boats aren’t made for the Great Lakes,” Wheeler laughed. “I love my Triton and I’m thankful to have it out there; it handles big water as good as any bass boat. But make no mistake, I’d much rather drive 30 miles in my Tundra than in my boat when we’re talking big water. It’s easier on my equipment and so much more comfortable for me.”
Safety is paramount but it isn’t the only thing Wheeler likes about the trailering policy; he also appreciates the extra wrinkle in strategy it creates. The Indiana pro is currently in the middle of an incredible hot streak that includes dominating wins at both the Bass Pro Tour and FLW Super Tournament level in 2020.

Wheeler has experienced mind-boggling success throughout his young career and many would attribute that to his detailed understanding of strategy within tournament fishing, along with his tireless work ethic.

“Having the ability to trailer to different ramps throughout the day absolutely adds to my strategy,” Wheeler explained. “Usually when we are fishing big water we have to pick an area and we’re pretty much limited to that decision. The Great Lakes are just too big and too rough to be running around on all day. But trailering gives us the ability to sample different sections of the fishery throughout the day.”

Wheeler is one of many anglers who took advantage of this policy during the Qualifying Round, trailering to a second ramp in the middle of Day 1 of competition in hopes of colliding with a school of ever-elusive smallmouth he found during practice.

The tournament boundaries are so extensive for this event that anglers like Wheeler are still somewhat married to a region of the fishery based upon which boat ramp they initially launch from. But instead of a potential two+ hour brutal boat ride to check another area, Wheeler can make a comfortable twenty-minute drive in his Tundra.

“Just having the option to trailer does good things for our mindset out here,” Wheeler said. “You see us on camera fishing in big waves, but I don’t think most people realize how damaging running big water can be. It pounds our bodies, our equipment, and absolutely affects our decision making on the water. The trailering policy allows us to fish with a clear-mind… it’s the deal.”