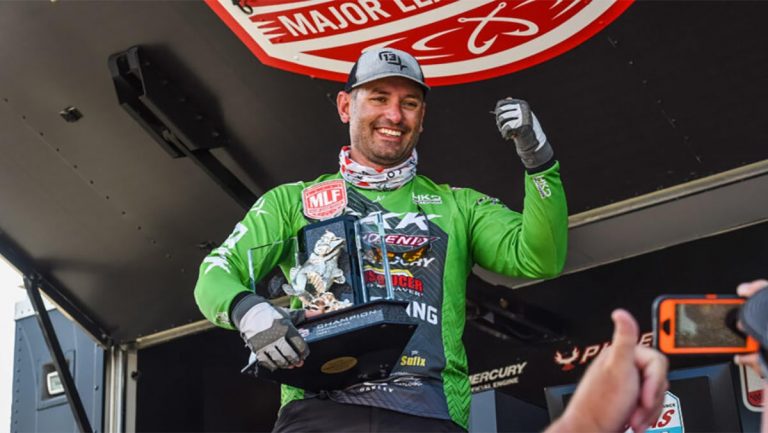 Rookie Jacopo Gallelli of Florence, Italy, brought a five-bass limit to the scale Sunday weighing 20 pounds even to win the MLF Tackle Warehouse Pro Circuit Presented by Bad Boy Mowers, Federal Ammunition Stop 5 Presented by Lucas Oil at the Potomac River . Gallelli’s four-day total of 20 bass weighing 65 pounds, 3 ounces earned him the win by a 2-pound, 5-ounce margin over pro Michael Neal of Dayton, Tennessee, and the top prize of $100,000, making him the first European to ever win a professional bass-fishing event in the United States.

Gallelli fished one area in Potomac Creek all four days of the competition – an area that produced the biggest limit of the tournament on Championship Sunday – where he moved back and forth, running to the top, then drifting down with the wind.

“It’s kind of amazing – It’s been such a long road and I’ve had so many things happen this season that just weren’t going my way, so to end up here with this win is absolutely amazing,” said Gallelli. “This trophy means way more than the money for me. I’ve invested my entire life trying to achieve this level of fishing in my career, and I am finally here. I came 5,000 miles across the ocean to make this day happen.

“It’s been such a sacrifice and the sacrifice has continually grown,” continued Gallelli. “If I go back home, I cannot keep competing. I’ve missed my son’s birthday, Christmas, New Years, Easter and now it sounds like I probably cannot go back to Italy until the beginning of the fall. But I will be coming back with something great. It’s not about the money – it’s about coming home with one of these [trophies].

“The only thing that would have made this a better Father’s Day celebration is if I were able to hold this trophy with my son,” continued an emotional Gallelli. “I dedicate this win to my son, Lapo – Ciao Lapo.”

Gallelli is the first European to ever win a high-level tournament in the U.S.

“Believe it or not, this is the very first event I have ever won in the United States,” said Gallelli. “I’ve had a lot of good results on the lower-level circuits, but never a win, so finally I’ve made my win happen when it really counts. This is as good as it can be. I feel like I am watching from outside my body right now. It’s just unbelievable.”

Gallelli went up against some of the biggest names in tournament bass-fishing on Championship Sunday, making the victory even more important for the rookie angler.

“I know I just beat some of the best in the sport, but honestly it’s not only my skill – it’s the support that I’ve had from everyone,” said Gallelli. “Thousands of people were cheering for me today from Italy and Europe, cheering like there was no future and I was about to win a soccer championship. I don’t even have the courage to open my phone. It’s been ringing and lighting up non-stop – everyone is calling and sending messages.

“This win is not big because of me,” continued Gallelli. “It’s big because 40 years ago someone launched a bass-fishing tournament in Italy and one young kid started dreaming. I’d like to thank those pioneers of bass fishing in Europe for bringing this idea of fishing to Europe and to Italy.

“This is a win not only for me but for the entire European bass-fishing movement. It’s incredible.”