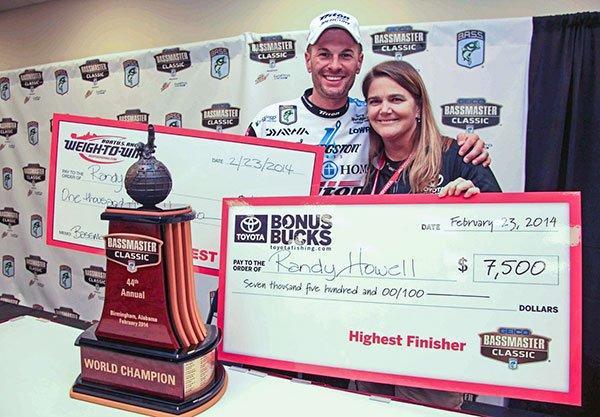 And it seems he heard the first hint of success on an escalator at the Birmingham Jefferson Convention Center complex prior to Tuesday’s official angler registration meeting.

Randy and wife Robin were headed down the mechanical staircase, and Kendell Callaway-Mooney, a long-time representative of the popular BoatUS Angler â€œWeigh-to-Winâ€ and Toyota Trucks Bonus Bucks cash contingency programs, was headed up. In her hands were two oversized cardboard bonus checks to be awarded to the highest finishing eligible angler at the Classic’s conclusion.

â€œRandy and Robin were the first two members of the pro angling community I saw that day, â€œ said Callaway-Mooney. â€œRandy being the fun guy that he is, spotted the checks, smiled, and told me I’d be writing his name on the checks later in the week.â€ Callaway-Mooney grinned at Howell and told him, â€œIf you say so.â€ And then traded a high-five hand slap with Robin and Randy.

Howell wasn’t being arrogant. He’s plenty well grounded in his faith and life’s challenges. In fact, he humbly reminded reporters in the post Classic press conference that he’d only won three times in 21 years as a pro. But much like the game-winning, last-minute intuitive decision he made to turn his boat and fish Spring Creek the final day instead of Mill Creek, through an inner voice, he just seemed to know the bonus checks might very well have his name scrolled on them five days later.

â€œRandy was one of the very first anglers to sign up for Bonus Bucks in 2008, and later was quick to register for Weigh-to-Win,â€ Callaway-Mooney said. â€œHe’s always so genuinely nice and appreciative. He’s a good heart, and he’s always there to support our efforts with enthusiasm,â€ she concluded.

Unlike Howell, you don’t have to win the Bassmaster Classic to win the cash bonuses; you simply have to be the highest eligible finisher in your event. To learn the specific details of each program, please check out www.BoatUSFishing.com and www.ToyotaTrucksBonusBucks.com, or simply call Kendell at (918) 742-6424, she’ll be happy to make sure you get signed-up for either or both programs.