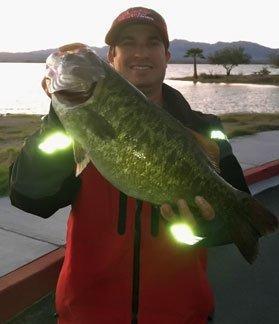 “I was out fun fishing with my good friend John Perkins for a few hours before dark when Icaught it.   We were sure it was over 6-pounds, and on our handheld scale it was.   So we decided to take it in and weigh it.   We took it to a certified scale at Bass Tackle Masters, John Galbraith’s tackle shop, and it weighed 5.63 which was enough to be the new record,” Kerr explained.

Once the fish was weighed Kerr and Galbraith filled out the appropriate application for the Arizona Game & Fish and sent it in.   Kerr received confirmation on November 15, 2011 that his application was approved and his fish is now considered the Colorado River System record Smallmouth.