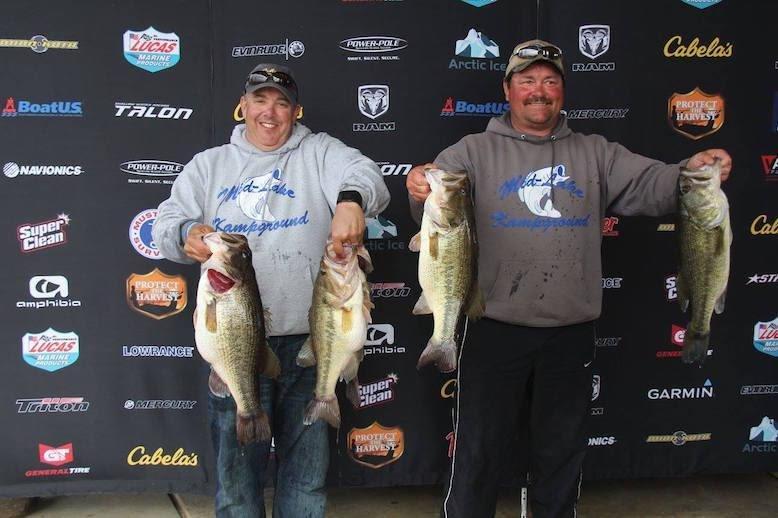 Alan Fitts and James Dutton, both of Hemphill, Texas, brought 32.01 pounds of bass to the scales to win the second regular-season event of the Texas Team Trail presented by Cabela’s (TXTT),  Feb. 20 on Toledo Bend Reservoir. The winning anglers took home a brand new Stratos 189VLO powered by a 150 HP Evinrude outboard. Along with contingency prize money, the duo earned a total of $33,420 in winnings.

Out of the 341 registered teams, nearly 200 brought in five-bass limits. Toledo Bend proved once again to be East Texas’ premier tournament destination with 31 limits over 20 pounds and multiple fish caught above the 10-pound mark.

Fitts and Dutton have a combined 25 years of tournament experience and both call Toledo Bend their home waters. As owner of Toledo Bend’s Midlake Kampground, Fitts makes it his business to know the local waters. The anglers’ native knowledge combined with properly reading weather and water conditions helped lead the team to a big win.

“The water temperature has been warm, but there have been cool nights so we figured most of the fish would still be out on deep structure spots,” said Dutton. “We got them on a pre-spawn staging area. We were fishing football jigs in about 17 to 25 feet.”

It was more than just water temperatures that went into their success. The team relied on finding baitfish to locate pre-spawn bass. They used a local jig, a 5/8-ounce Talon, with a green pumpkin Yamamoto Hula Grub around deep structure.

“This time of year, if they’re not on beds, you better find bait,” said Dutton. “If you can find the baitfish, you’ll find the bass. We were fishing only 20 to 30 feet from the main river, which is 50 or 60 feet deep. It’s where the river and the creek come together to make an underwater point. We stayed in the mid-lake area, not too far from the Midlake Kampground.”

Second place finishers Chris Russell of Montgomery, Texas, and Mike Power of Conroe, Texas, did find bass on beds and proved that some fish had moved up to shallow water. They checked in a 28.60-pound limit with their largest bass weighing 10.88 pounds to earn a total payout of $10,839.

“Mike caught that good one, the 10.88, on the first cast of the morning,” said Russell. “Now that’s a good way to start the day. Most of the ones we caught flipping were probably on beds, but it was too dirty to see. One time we threw in there and caught the male and then threw back and caught the female.”

Andy Gaia of Tomball, Texas, and Brian Tolley of Katy, Texas, took third place with a 27.35-pound stringer, earning $7,281. They too were successful in shallow water and relied on sight-fishing for all of their weigh-in fish. The anglers made their decision after visually locating buck bass up on beds during practice.

“We liked what we saw yesterday so I just made the decision to commit to it,” said Gaia. “I came back to the cabin after practice and tied three sight-fishing rods – two with braid and one with fluorocarbon.”

The next tournament stop for the TXTT is set for March 19 at Richland Chambers Reservoir. The 2016 schedule includes some legendary Texas bass fisheries and features huge payouts with unprecedented contingency opportunities.

For additional information, anglers are encouraged to call 210-788-4143 or check out the TXTT website at www.texasteamtrail.com. Site visitors can register for events, review the television schedule, get official Texas Team Trail gear, view results and learn more about what’s in store for 2016.