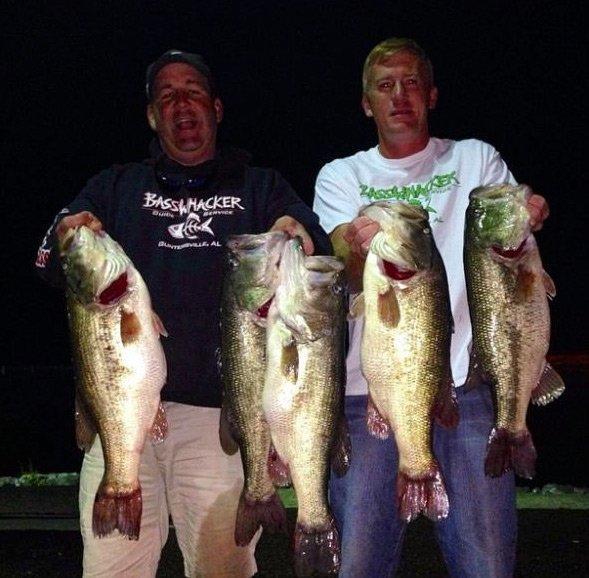 UPDATE: The duo was found guilty and sentenced. To see the sentencing information, visit this link.

Well another cheating story around bass fishing has reared its ugly head, this time on one of the most famed bass fisheries in America, unfortunately. Gary Minor Jr. of Albertville, Ala. and Robert Gillaspie of Boaz, Ala. were arrested and charged with Tampering with Sport Contest after authorities received a tip that the duo had been holding bass in a pen at a dock and using the previously captured fish to dupe competitors in local evening jackpot bass fishing tournaments on Lake Guntersville in Alabama.

Sources say authorities setup a sting operation Thursday, May 8, 2014 to watch the dock in question and caught the duo in the act and made the arrests. Apparently reports have confirmed that the duo was actually using aquariums to pen up bass to later be used for weigh-ins in jackpots. FLW Tour professional angler Richard Peek was the first to witness suspect activity by the duo and alert authorities.

Capturing fish and holding them in holding tanks to be later taken out and put in your live wells and then trying to pass them off as fish you caught by sporting methods during tournament hours to win a few hundred bucks is consider fraud and tampering with a sporting contest in most states.

There was some speculating of involvement of local guide and recent Rayovac Series champion, Jonathan Henry who owns and operates Bass Whacker Guide Service on Lake Guntersville.

Henry was apparently duped by the duo as well, even fishing one time with Gillaspie after talking fishing with the duo at a boat ramp one morning. According to Henry, he had no idea the duo had plans to cheat in local tournaments when they would occasionally call asking what the fish were doing, etc. He gets hundreds of those calls a month and thought nothing of it. Especially since both men are perceived to be successful business owners in the area and did not appear to need the money.

Here is what Henry had to say about the speculation that he might somehow be involved:

“I met these guys about a year ago. I did some business with both of them, mostly Rob. I was in his shop 8-10 times in the year we knew each other, having my boat worked on or cleaned, and I was around him personally 8-10 times outside of work, mostly out to eat with our wives and so on. With Gary, I have been around him in person 5 or 6 times. I actually considered them my friends on a personal level, but these individuals were in no way ever employed by my company, or part of any pro-staff or promotional team.

“They had seen my shirts around and asked me if they could buy some. So the next time Rob worked on my boat, I gave him a few, and likewise, when Gary finished concrete at my house, I gave him some as well. I have given shirts to hundreds of prospective clients, just like the ones these guys were eventually wearing in several tournament photos that are now circulating with their arrests. I even posted photos of these guys after they won tournaments, only because I was proud for them. I never imagined they were winning unethically.

“For the record, I had absolutely nothing to do with this scheme, and I absolutely despise the events that have transpired on my home lake. I would never be knowingly associated with anyone who was involved in the crimes these two are accused of. I feel as hurt and betrayed as anyone.” — Jonathan Henry BassWhacker Guide Service