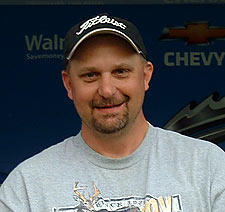 It’s been confirmed that FLW not only disqualified an angler in this weekend’s BFL on Wylie Lake in North Carolina but they also banned him for life. The angler in question, John Hoyle, also known as Brian Hoyle, of Rutherfordton, N.C. was caught weighing in a bass that had a hand-poured, 11-ounce lead weight in its gullet. FLW has been taking extra precautions in checking the fish at the bump table to make sure no bass were being weighed in with lead in the bellies. They were actually on the lookout in this particular tournament.

After the weigh-in, Hoyle’s fish were kept aside when the tournament official felt a hard object in the fish’s gullet and his check was withheld until it could be examined. As a result of his DQ, everyone else in the tournament field will move up a spot in the standings, and the money will be redistributed based on the new rank in the tournament’s standings. It appears he also had big fish for the tournament (seen being weighed here). That presents a problem because most of the time no records are kept of second or third big bass in tournaments and many anglers won’t weigh a 5-pound bass if they know a 6-pound bass is leading.

Obviously the lynch mob is out in North Carolina fishing circles, and chances are likely that this angler has done this before. Kudos to FLW for taking the extra steps to run clean tournaments where anglers can feel safe they are on a level playing field. FLW’s obligation is not to make examples of people, it’s to run the cleanest, fairest, funnest tournaments they can. They’ve done a good job of catching and removing cheaters from competitions when they can find sufficient evidence.As for the speculation as to how the cheater was able to pull this off with a co-angler, we talked to FLW officials about that as well. The co-anglers were getting the trucks because of the trailered weigh-in due to the venue. That is when it is speculated the angler jammed the lead in the fish’s gullet.Several folks have commented on how his 11-ounce cheat didn’t jump him to second and without it he still would have been third. But we believe his intent was to get the big bass money. So he made a bass that was close, over the top.

We’ve poured a lot of lead in our time, and an 11-ounce lead weight is no small piece of metal. FLW runs a good tournament series at multiple levels, and we applaud their efforts to keep this about fairness and sportsmanship. It’s no easy task for any tournament organization, we assure you. There will always be that 0.00001 percent of the tournament fishing population that wants to shortcut the system somehow.