The Toyota Texas Bass Classic is taking place on Lake Fork and the legendary East Texas fishery is spitting out fat green largemouth in a manner that has many top pros wondering if they might catch their personal best 5-bass limit this weekend.

Terry “Big Show” Scroggins caught his personal best 5-bass limit in 2008 at the Bassmaster Elite on Falcon Lake. It weighed a monstrous 44 pounds 4 ounces. He caught it on a 10″ worm. But the likable Florida pro says there’s no doubt he could – could – eclipse that mark today or tomorrow.

Scroggins isn’t being cocky. Not one bit. He simply knows what lives here. He was one of 14 pros that caught at least a 30-pound limit yesterday, and his biggest fish on Friday was a 9 ½ pounder.

VanDam has been there, done that, and seen it all in his 24th season as a pro, but even “KVD” seems a bit mystified by the catches he and other pros are encountering on Fork.

In wide-eyed fashion, just before weighing-in an 8 pound 8 ounce bass than any mortal angler would likely have called the fish of a lifetime, VanDam stated, “This lake has a lot of 10-pounders in it, and it’s been a long time since I caught a 10-pounder, and I’m gonna tell ya’, I saw one today that weighed way more than 10. It was an absolute freak of nature. I don’t know, hopefully I can catch her before this thing is over.”

Giant bass require oversized tackle. The deepest diving crankbaits ever invented are a common sight this week, and so are large spools fill with braided line, and large swimbaits too. “Normally, in most places we go, we’ll throw a 4″ swimbait, but here on Fork we’re throwing 8-inch baits on larger reels like an EXO 200 with a lot of line capacity,” explained VanDam. 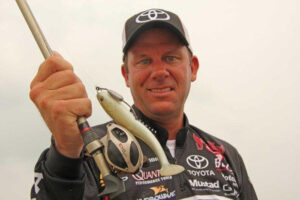 He also noted that 10″ worms, ¾ ounce football jigs, and magnum-sized topwater lures are all in play this weekend.

The ever-hilarious Gerald Swindle enters Day Two on Lake Fork dressed in bright red tennis shoes and socks, but knows the chance to eclipse the personal best 32-pound limit he caught with a Carolina Rigged Zoom Brush Hog from Falcon Lake is no laughing matter

“If I can catch me a 41-pound limit today, I can get back in this thing,” said Swindle before blast-off.

Sounds funny. But it’s not. It’s the serious reality of what swims here, and the realistic chance of assembling your biggest 5-bass limit ever just about any day you launch your boat on Lake Fork – including this weekend for 50 of the best bass pros in the world at the Toyota Texas Bass Classic. 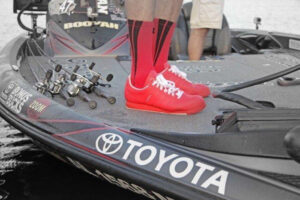