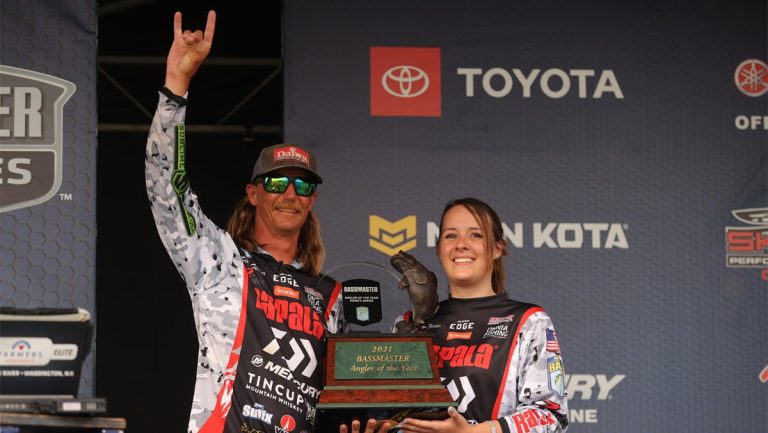 Seth Feider of New Market, Minn., wrapped his arms around a lifelong dream as he kissed the Bassmaster Angler of the Year trophy on Day 2 of the Farmers Insurance Bassmaster Elite at St. Lawrence River.

The seventh-year Elite Series pro currently sits in eighth place with a two-day total of 42 pounds, 3 ounces, so he’ll be competing for at least one more day. More importantly, though, his points total of 792 gave him enough of a cushion to secure the coveted AOY title no matter how he finishes the tournament.

“It’s a milestone; it’s a (lifetime of) work,” Feider said. “Ever since I was a little kid, every minute fishing was to get to this, it feels amazing.

“It feels like the weight of the world is off my shoulders now that it’s all over. It’s been a stressful last couple of months.”

While Feider can relax and make plans to spend the $100,000 prize that comes with the AOY title, there is still much to be decided this week.

Leading the event, Gainesville, Fla., pro Bernie Schultz overcame a painful loss Friday to maintain the top spot with a two-day total of 47-14. Schultz added 22-9 to the 25-5 he weighed on Day 1.

How painful? Put it this way: Schultz is one of the coolest heads on the water, but when Bassmaster LIVE showed a big fish that Schultz estimated at 5 pounds come unbuttoned right at the boat, the seasoned pro experienced an understandable moment of obvious exasperation.

Returning to the same 250-yard flat near Chippewa Bay where he caught his Day 1 limit, Schultz found the fish scattered over various sections of broken bottom comprising rock, gravel, sand and grass clumps.

“The composition changes depending on what part of the flat you’re on,” Schultz said. “There’s a secondary channel edge that the flat drops into, and I think that’s what’s bringing the fish to it. They have that deep-water access nearby.”

Schultz said he is catching fish in 8 feet of water, although he’s caught them in 5 or less when he’s fished this spot in previous years. Presuming this to be a postspawn positioning preference, Schultz said he is mostly fishing for unseen fish.

“They prefer open areas,” he said. “They like that other stuff around them, but they like to be on clean bottom.”

Schultz tried to capitalize on the morning’s dim, overcast conditions with a Rapala X-Rap Pop, but to no avail. He ended up catching his fish on a 1/4-ounce VMC Ned Head jig with a 3-inch Yamamato Senko in the green pumpkin/watermelon laminate color.

On Thursday, Schultz led the Phoenix Boats Big Bass standings with a 6-2. On Friday, he had two that went 5-1 each.

Chris Johnston, of Peterborough, Canada, is in second place with 46-5. Having tied his older brother Cory for second on Day 1, he added 22-14 to Thursday’s bag of 23-7.

Johnston, who became the first Canadian to win an Elite title at last year’s St. Lawrence River event, spent the majority of his day in Lake Ontario, not far from the mouth of the river. He hit about 10 different spots and caught his fish in 5 to 30 feet of water.

“It was nice today; it laid down and I could move around, which was nice,” Johnston said of the day’s calm conditions. “I hit a couple of new spots, and one of them ended up having quite a few fish on it.”

Johnston caught his bass on a mix of reaction and finesse baits. His biggest fish of the day was 5 1/4.

Hailing from Cavan, Canada, Cory Johnston bolstered his first-round effort of 23-7 with Friday’s limit of 22-2 for a third-place total of 45-9. Targeting a mix of main-river rock reefs and isolated boulders, he caught his fish on a drop shot.

Johnston said he fished multiple spots throughout a 90-mile stretch from the takeoff area to Chaumont Bay outside the mouth of the St. Lawrence.

“This place is incredible; I say that every time we get to fish here,” Johnston said. “I left some fish out there for tomorrow and I found a few new ones.

“I ran a lot of the same stuff I ran yesterday and ran some new stuff and found some new groups of fish.”

Chris Johnston is in second place in the Angler of the Year standings with 729 points. Former AOY (2017) Brandon Palaniuk of Rathdrum, Idaho, is in third with 702 points, followed by Walters with 668 and Greg Hackney of Gonzales, La., with 667.

Josh Stracner of Vandiver, Ala., leads the Rookie of the Year standings with 552 points.

The Top 45 remaining anglers will take off at 7 a.m. ET from Whittaker Park. The weigh-in will be held back at the park at 3:15 p.m.