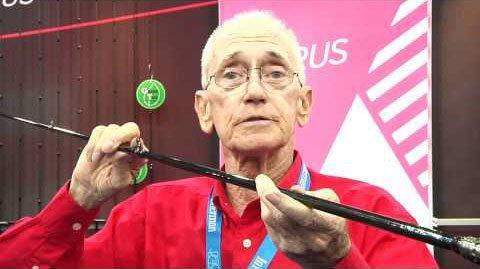 Legendary rod designer Ken Whiting has passed away. Whiting was the founder of Airrus Rods and he won several Best of Show awards at ICAST, including three years in a rod (2002-2004) for his outside the box style of thinking. He was successful in making rods with features and practices not used at the time by other rod companies.

He later joined forces with E21 to develop the original line of Carrot Stix rods, utilizing nano-fiber technologies (i.e. strands off of carrot skins). From there he was lured away from E21 with their sponsored professional angler and self-made business man Boyd Duckett when Duckett decided that his differences with E21 were best served by starting his own company, Duckett Fishing. Whiting helped launch the rod designs and brand with Duckett, before ultimately returning to his roots with Airrus Rods in 2011.

Whiting was always fun to chat with at the ICAST show. He was a promoter, a creative thinker, a passionate advocate for innovation in the sport fishing industry. It was part used car salesman, part grand dad, part crazy scientist when I talked to Ken. I really enjoyed our conversations and will miss not having future conversations.

“Airrus is very sad to announce that Ken Whiting, founder of Airrus, passed away yesterday night,” said Francesco G. Di. Bene of Airrus Rods. “He was one of the most influential designers in the industry and a great man, he will be deeply missed.  The best we can do to honor him is keep thinking ‘out of the box’ developing new ideas and maintaining unaltered his innovation philosophy.”