The US Energy Information Administration estimates there are roughly 370,000 all electric cars and light duty trucks driven by consumers in 2017. That number is projected to be 5.75 million vehicles in 2027. So it was inevitable that an all electric outboard motor would be designed for fishing boats sooner rather than later.

Pure Watercraft is the first company bringing the electric outboard propulsion system to boats in bigger way, and anglers like Troy Lindner are already proving their merit in the early seeding of these new technologies. Lindner recently won a National Bass West team tournament on San Vincente Reservoir in Southern California with his team partner Derrek Stewart with five bass that weighed 24.96. They fished out of a Lund 1600 Fury tricked out with a Pure Watercraft Electric Outboard. They also had big bass for the event. All the other competitors were running big gas-powered outboards on fiberglass or aluminum fishing boats.

Lindner saw an article on TechCrunch.com that piqued his interest and catered to his passion for cleaner waters and better care for fisheries in the future. The article talked about Pure Watercraft’s Pure Outboard that was a 100% electric outboard motor for boats. Lindner reached out to the company in 2016 and wanted to be one of the first testers for fishing applications in southern California.

He outfitted a Lund 1600 Fury with a Pure Outboard this past winter and has been loving the looks he gets and the fishing he has seen out of the rig.

“People hear a noise of rushing water, but don’t hear a motor so they always have a look of shock when they look up and see a boat racing by them,” Lindner said. “It’s already exceeded my expectations. The quietness I’m convinced is an advantage to fishermen fishing clear water and pressured fish. But the zero maintenance, immediately on nature of the system and the incredible hole shot have been so pleasing to fish. You can’t even believe how easy it is to jump from spot to spot and just cover water in an area with this type of system.”

The Pure Outboard has a host of features that will make it attractive to anglers fishing on smaller waters where stealth can be all the advantage in fishing. The all-electric motor makes almost no sound. There is literally no maintenance for 10 years. You don’t have to buy gas, oil or do routine service on the motor. And it’s instantly on. No button. You push the throttle down, and it jumps on pad.

It can run on a single lithium battery or multiple batteries that they also develop specifically for this outboard. It can be throttled from 9.9 hp up to equivalent 40 hp gas motors. So if you have horsepower restriction lakes, you can adjust on the fly but still have the 40hp option when you want it. And it can be charged in a matter of hours with their standard charger or 8 times faster on a pro model charger they are developing. 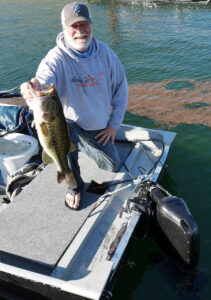 “I have had my boat close to 30 mph, but most of the time I run about half that so I can run longer on my dual battery setup,” Lindner said. “Used to, I would shut down the big motor, then run the trolling motor a long way into my area I planned to fish on these clear California reservoirs. Now I just run right up to the spot and start fishing. And I can jump around in an area so much faster because there is no starting, stopping, etc. I just leave my trolling motor down and hop spot to spot quickly and quietly.”

Pure Watercraft just made it through the first round of investor seeding, and they should start production soon. The battery technology will have to catch up to get to higher speeds and longer runs but right now this could be a solid option for anglers who fish smaller bodies of water. It will definitely be fun to watch how this progresses.

Here are some specifications on the new all electric option for fishing boats and you can learn more at PureWatercraft.com and their FAQ.

Specs of our Pure Outboard system: