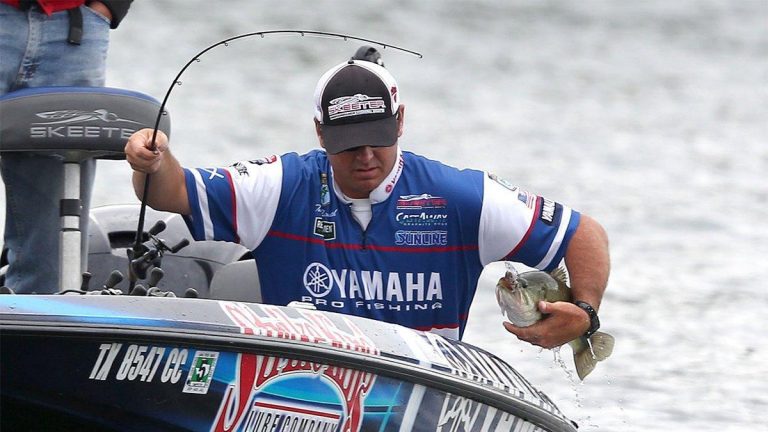 As water temperatures continue to cool during the late autumn and early winter months, bass fishermen often tie on topwater lures in hopes of having a final flurry of surface action. Yamaha Pro Todd Faircloth, however, does just the opposite, choosing a deep-diving crankbait to target fish that have already moved out of the shallows.

“It’s a technique I learned years ago fishing local tournaments here on Sam Rayburn Lake where I live,” said Faircloth, who will be competing in his 15th Bassmaster Classic in March. “The same fishermen always caught a lot of bass this time of year, but I didn’t know what they were doing. Gradually, their secret leaked out and I’ve been using it ever since.”

The “secret” Faircloth now fishes is concentrating in the far upper reaches of a lake’s main river channel where schools of bass continue feeding actively as they prepare for the colder months ahead. Generally ranging at depths between approximately 10 and 16 feet, the fish gather along the edge of the channel itself where a deep-diving crankbait can easily reach them

“A lot of lakes are drawn down to winter pool levels in late October and early November, which pulls both bass and baitfish out of the shallow flats and tributaries where they were in September,” Faircloth said. “They gather in schools out on the river channel where there is still plenty of water and where they’ll stay throughout the winter. Generally, when the days become consistently cooler and you stop seeing any type of surface feeding activity in the creeks, you can guess the bass have moved out. You can locate them with your electronics, or by fishing.

“I prefer to fish the outside edges of the channel bends, or where a tributary creek actually flows into the main river channel. I’ll keep my boat in deeper water and cast shallow, bringing the crankbait down the steeper edge of the channel. Occasionally, just to give the fish a different look at the lure, I may move shallow and cast deeper, but most of the time, the best presentation is retrieving from shallow to deep.”

Normally, Faircloth fills his reel with 12-pound fluorocarbon line to fish the 10- to 16-foot depths, but he’ll change to 10-pound line when the bass are a little deeper. He makes long casts and bounces the crankbait along the bottom during his retrieve, trying to hit any stumps or rocks along the way. This is primarily a structure fishing pattern, but any type of cover usually makes the area more attractive to the fish.

“This is a good time to catch above-average fish in the four to six-pound class,” Faircloth said. “And occasionally a larger one. The schools seem to be filled with bass that size, not a lot of small ones, and when you do catch one, you’re almost always going to catch several more. When the school you’re fishing does stop biting, you can run up the river to the next major bend and usually find another school to cast to.”

While this is an extremely productive way to fish, Faircloth cautions it may not last long, depending on weather conditions. As the water continues to cool, bass become less and less active and stop chasing fast moving lures. That’s when fishermen start changing to jigs or possibly drop shots.

“While it lasts, which is usually through November and into December on many lakes, this is one of the easiest and most enjoyable ways to catch bass for anglers during the entire year,” Faircloth said. “The fish are still feeding heavily so they’ll readily hit a crankbait, and they’re quality fish, too.

“Looking back on my early experiences on Rayburn before I knew about this technique, I can easily understand now why those same fishermen were always so successful in our tournaments this time of year.”