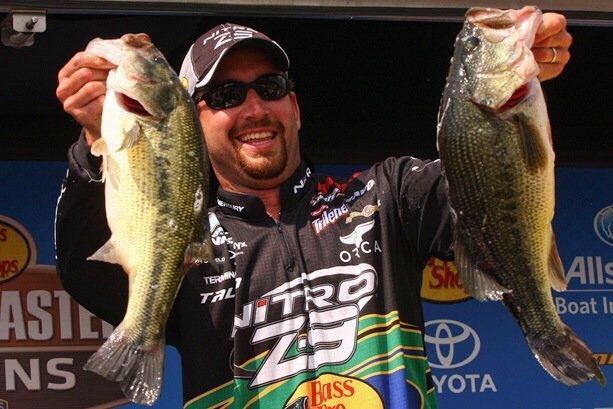 Bassmaster Elite Series pro Ott DeFoe got the monkey off his back by finally winning a major tournament on his home waters.

The Knoxville, Tenn., competitor clinched his first victory at Douglas Lake by catching the biggest limit of the tournament â€” a 24-pound, 1-ounce bag â€” to finish with a three-day total weight of 62-5 in the Bass Pro Shops Northern Open presented by Allstate. The pro division winner took home a Triton 19XS/Mercury 200 Pro XS rig valued at $40,000 and $8,021 in cash. This was the fifth major tournament â€” four Bassmaster events and a PAA tourney â€” that DeFoe has fished on his home lake.

Moving farther up the lake each day, DeFoe hit the jackpot on Saturday by catching 37 bass from his spots on the upper reaches of Douglas.

â€œIt was really all about changing,â€ DeFoe said. â€œI caught all of my fish deep the first day, and I caught them off of a couple of different places primarily cranking a Rapala DT16 crankbait in Caribbean shad. I also caught some on a Terminator football jig.â€

On Friday, DeFoe went to the same places, but when he couldn’t get bit there, he moved farther up the lake and eventually caught another heavy limit. â€œI changed a little bit again today and fished some different areas,â€ he said. â€œThen we got into one place, and we just hammered them.â€

Fellow Elite Series pro David Mullins finished in the runner-up spot again on his home waters with 52-11. The Mount Carmel, Tenn., angler also took second place in the Bass Pro Shops Southern Open held on Douglas Lake in April 2013. Mullins also went up the river for two days to get away from the crowds on the lower end of the lake.

â€œI caught most of my fish on a Strike King 6XD crankbait, and then today we had enough room down the lake, so I ran down and caught my big one on a Strike King 10XD first thing,â€ Mullins said.

Mullins caught the rest of his keepers on a Strike King Sexy Swimmer swimbait and the Strike King 6XD crankbait.

Daniel Beebe Jr. topped the co-angler division with 30-7 and took home a Triton 17 Pro/Mercury 115 Pro XS rig combo worth $25,000. The Niota, Tenn., angler caught all of his fish each day on a Basstrix swimbait in a Tennessee shad hue with a 3/4-ounce Revenge jighead.

The Livingston Lures Leader Award of $250 for finishing as the top pro on Day 2 was presented to DeFoe. The Day 2 leader on the co-angler side, Mandell Pettus, received a Livingston Lures gift pack worth $250.

Anglers in both divisions who advance the most places up the leaderboard from Day 1 to Day 2 receive the â€œAllstate Good Hands, Great Dayâ€ award. Pro division angler Pete Gluszek collected $250 by jumping 85 places from 126th to 41st. Co-angler Edward Rogers Jr. earned $150 by climbing 84 places from 96th to 12th.

The Toyota Bonus Bucks paid $1,500 to, Sevierville, Tenn., pro David Walker, who was the highest placing eligible pro angler entrant for the award.