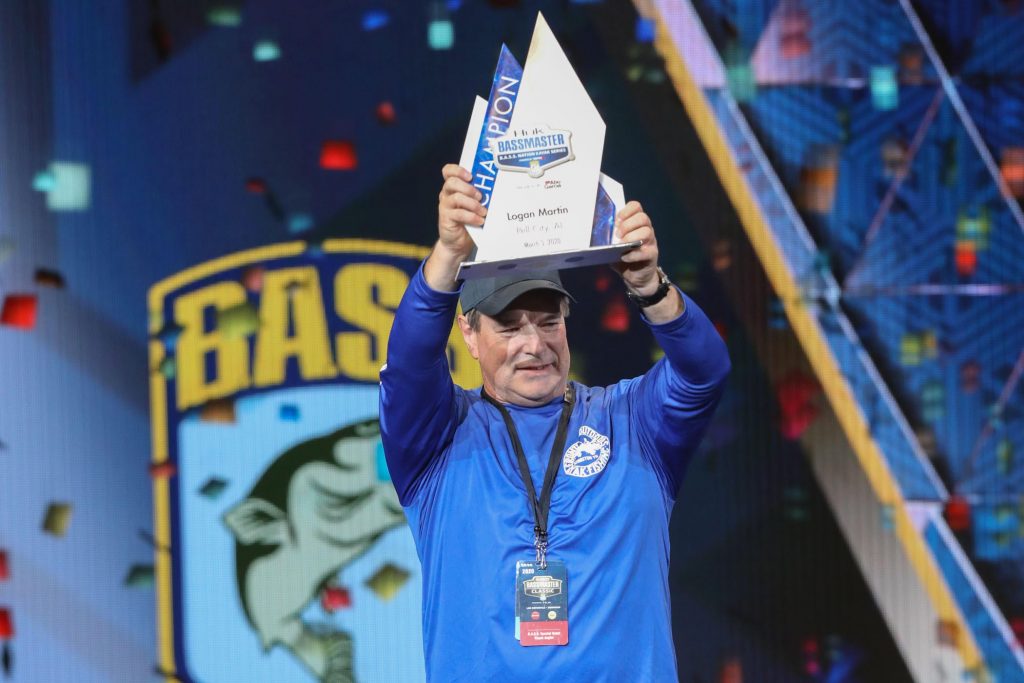 Davis’ big fish measured 20 inches to cap off his winning limit, earning him the $10,000 first-place purse.

Logan Martin is the third reservoir along the Coosa River, which begins in northwest Georgia and runs south to the Alabama River. The Coosa River is home to the legendary Coosa spotted bass, one of the strongest fish that swims. However, to win on Logan Martin, a big largemouth or two are necessary.

“I launched in Clear Creek, along with many other kayakers, and spent the day working a short length of bank,” he said. “This part of Alabama is saturated and there was plenty of current rolling through the lake, which helps the fishing. I got on a short stretch of rocky shoreline and literally fished it all day long.”

He said the current was positioning the bass along an edge that seemed to reload with fish by the minute.

“I spent seven hours on that little section and never moved,” he said. “I used a Storm Arashi Spinbait the entire time, which is unusual for me because I typically throw a Yamamoto Senko. However, the Spinbait was the only lure I had that matched the baitfish I was seeing. The fact that I was fishing from a kayak forced me to slow down and focus on a specific area, and it worked.”

Davis fished out of an Old Town Predator PDL that he’s had for two years.

“I sold my bass boat and bought a couple of kayaks. The Old Town has been incredible,” he said. “I’ll be fishing from a kayak as long as I can. I love it.”

Mark Edwards from Pipestem, W.Va., wrapped up his event in second place after a solid day on Logan Martin where he produced a five-bass limit measuring 84 3/4 inches. Edwards runs a Native Watercraft Titan, and attributes his success to its stability and accessories.

“I run a Torqeedo kayak trolling motor, which was critical to covering a lot of water and dealing with the current running through the lake right now,” Edwards said. “I started in Clear Creek on both days of practice. I found fish in the main lake pockets, but in a kayak I couldn’t cover enough of those pockets to be competitive. So, I focused on the fish I found in Clear Creek and it paid off.”

“The spotted bass were schooling all day long in Clear Creek and I managed to catch some nice ones throughout the day,” he said. “This was a great event on a great lake even though it rained nearly the entire day. I’ve been fishing competitively from a kayak for three years and I’m super excited to see it getting national attention from Bassmaster. That’s going to take this community to new levels and I’m proud to be a part of it.”

Jonathan Lessmann of Madison, Ala., fished out of a Bonafide 127 rigged with a Torqeedo trolling motor, YakAttack accessories and a Humminbird Helix 7.

“I launched in Clear Creek and watched the water muddy up as the day went on,” Lessmann said. “But as the current picked up, I was able to catch fish from a mudline on a consistent basis. I threw a custom white spinnerbait with a hybrid skirt in 2 feet of water or less to catch most of my fish. After several passes, I was able to narrow down the specific area where the bulk of the fish were staging and it really paid off.”

Lessmann is a disabled Army Veteran and found that competitive kayak bass fishing is good medicine for the body and soul.

“I can’t really stand for long periods of time, so a kayak is a natural fit,” he said. “I’ve always been an avid fisherman. Without fishing I don’t know what I’d do. Thankfully, a veteran friend of mine introduced me to the sport and I’ve been crazy about it ever since.

The B.A.S.S. Nation Kayak Series continues on Lake Fork in Texas next week, then to Tennessee’s Chickamauga Lake, the Upper Mississippi River in La Crosse, Wis., and wraps up at Clear Lake in Northern California.