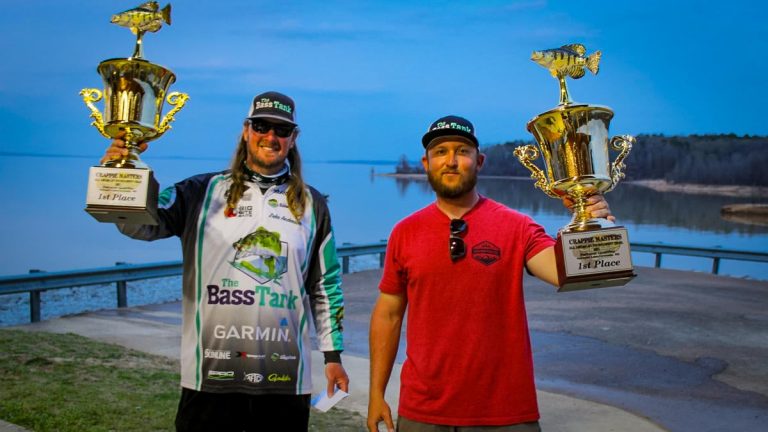 In what can only described as the best crappie tournament ever, The Crappie Masters qualifier on Grenada Lake, March 12-13, 2021 saw more than 45 teams weigh at least one crappie over 3 pounds and the winning team of Zeke Anderson and Dillon Hackler of The Bass Tank had 42.84 for two days with 14 crappie at an astounding 3.06-pound average per fish. And they didn’t even have the biggest crappie. Lamar Bunting and Greg London had a crappie that weighed 3.78 pounds to win the big fish pot of $1,358.

Many anglers have described what’s happening on Grenada Lake this spring as a perfect storm of trophy crappie fishing. Grenada Lake has seen some massive flooding for a few springs that allowed a bunch of big crappie to evade anglers at their most vulnerable time. So when the tournament anglers rolled into Mississippi this past weekend, they found a bunch of giant prespawn crappies up and biting.

Anderson and Hackler just started fishing as a team this year but have been friends for a long time. Both are extremely adept at targeting open water crappie with Garmin LiveScope installed and configured by The Bass Tank. They used one bait the whole trip, a Redneck Rubber Baits Bone Meal Beaver Bottom Bait. They pre-fished half a day Thursday and dead trolling motor batteries had them hunting new batteries the other half of the day. They were one of three teams to weigh a limit weighing more than 21 pounds the first day. The first day leaders of Blake Cook and Nathan Caldwell weighed in an unbelievable 21.92-pound stringer of 7 crappie smashing the one-day record.

They bounced around a lot running their new trolling motor batteries dead by the end of the tournament day. The final day they had about 17 pounds in the livewell at noon so they hunted for a new spot. As soon as they pulled into their new area, Hackler started putting on a show bouncing 3-pounder after 3-pounder into the boat.

Meanwhile the second place team for the two-day event, Matthew and Bruce Rogers caught 20.86 pounds on day one and 21.55 pounds on day two, for 42.41 for 14 crappie … AND LOST! In what world can you have 14 crappie that average 3 pounds apiece in a tournament and NOT WIN? That’s the parallel universe Grenada was this past weekend. There were 1,012 crappie caught in two days with an average weight per fish of 2.46 pounds. That is simply Incredible! 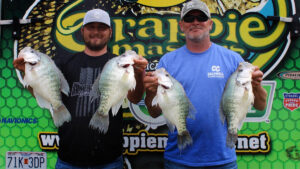