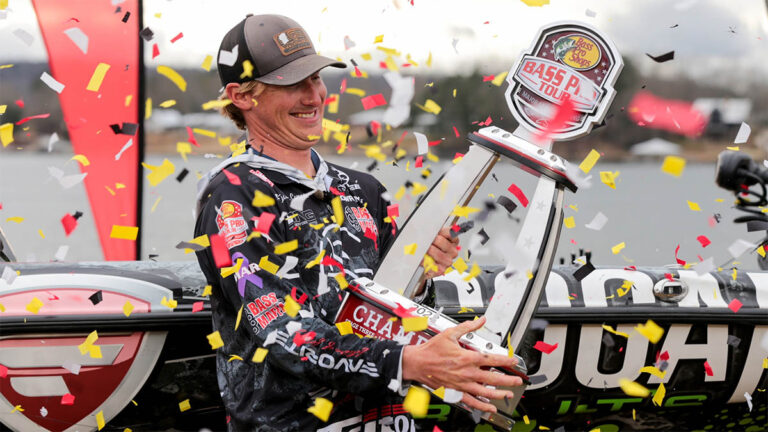 For the second time in two years, Alabama is ‘home sweet home’ for MLF pro angler and 2021 REDCREST Champion Dustin Connell of Clanton, Alabama, who caught a total of 33 bass weighing 71 pounds, 2 ounces during Monday’s Championship Round to take home the big, red trophy and $100,000 at the Favorite Fishing Stage Three on Lewis Smith Lake Presented by Mercury in Cullman, Alabama. This was Connell’s second major national win in his home state, the first being REDCREST 2021 on Lake Eufaula, in Eufaula, Alabama.

Monday marked the seventh time Connell has qualified for the Championship Round on the MLF Bass Pro Tour. The MLF NOW!® broadcast team coined the Alabama pro “Connell the Conqueror” – a moniker that just may stick after battling it out with a star-studded field of fierce competitors and a headliner list of some of the best in the business.

Connell said he felt blessed to be able to find his honey-hole on Lewis Smith Lake and that everything lined up the way it did on the final day.

“I rolled in here during the afternoon of the Knockout Round. When I saw the fish and the opportunity in here my adrenaline started rushing and I thought, ‘Oh my goodness – this is the winning spot’,” said Connell. “I knew if I could make it into the Championship Round, it could happen. I woke up this morning and told my wife and my camera guy Brett, ‘It could happen today.’

“I think I ended up catching over 70 scorable bass today – I got a little bit of ‘bass thumb’ going on,” laughed Connell.

The Alabama pro said he attributes his success on Championship Monday in large part to the current on Lewis Smith Lake.

“The water has been high on this fishery all week, but they started pulling off two turbines in preparation for the rain today, which is a lot of current,” said Connell. “I could see a lot of spotted bass stacked up on a big rock ridge on my Lowrance ActiveTarget . Any time they got up off the bottom and on bait, I could pitch over to them, and it was an automatic bite.

While the numbers looked great at the end of the third period, the final day wasn’t a runaway by any means. Connell had Berkley pro Jordan Lee – a Cullman local who ended the day in second place – on his heels, getting within 12 pounds of him twice throughout the day.

“Kudos to Jordan, man, he caught them good,” said Connell. “I just kept listening to my SCORETRACKER® updates and thinking, ‘Please don’t break that 10-pound barrier’, because you can easily catch two five-pounders here and then boom, someone else is leading.

“I caught those last few fish and was thinking ‘I just won the tournament’, but I was still checking with my competition official with three minutes left on the clock,” laughed Connell.

And what a confidence-booster for Connell – to win another major event before going into REDCREST 2022 – the prestigious Bass Pro Tour World Championship – in just a few short weeks in Tulsa, Oklahoma.

“I felt like I was in a bit of a slump after last season ended, because I hadn’t made a top 10, other than REDCREST 2021,” said Connell. “I came close several times, but it just didn’t ever work out.

“The first two events this year were tough for me, so I did not see this week going the way it did. I knew something special could happen, but I’d have to find the right little zone for everything to work out.”

And find it he did, during the Knockout Round, with one hour left of competition.

“Outside of the current, I think the biggest key for me this week on Smith Lake was the warm weather, followed by warm rain,” said Connell. “It kind of put all the fish in the creeks in a funk because they are wanting to spawn but weren’t really ready to get up there yet.

“The water throughout most of the fishery was high and muddy all week – but the fish up at the dam where I fished today were hardcore, pre-spawn bass, which was a game-changer. The water temp was 52 degrees there, whereas it’s 62 up in the creeks, and those fish by the dam were all grouped up. I knew if someone could find them in that deep, clear water, they could win the tournament.”

The top 10 pros at the Favorite Fishing Stage Three Presented by Mercury finished:

Overall, there were 164 scorable bass weighing 341 pounds, 12 ounces caught by the 10 pros Monday.