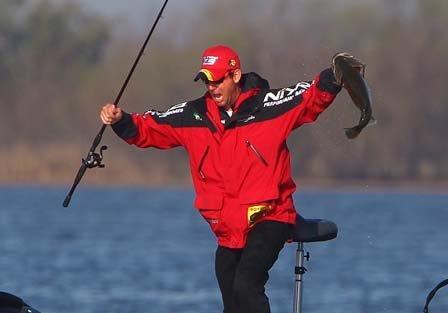 Editors Note: We’re going to have a recap next week on the trends that came out of this tournament and follow back with all our coverage this week for good lessons on fishing this amazing fishery.

Well it’s set in stone now, KVD is the all-time great in the sport. You heard it here first. Just kidding. But seriously two things are certain: VanDam wins and the Louisiana Delta in the prespawn/spawn stage is an amazing fishery! We’ve heard from three anglers today that lost 8- to 10-pound fish today. We know of others that caught and lost big bass. No telling how amazing the catch would have been if they had full 8 hour days everyday this week.

VanDam, a name synonymous with “power fishing,” wrote another chapter in the B.A.S.S. history book as well as his own legacy in the sport. The worst part for other anglers is he isn’t going to retire probably for another 20 years. His ability with a crankbait has put him with the top crankbait fishermen of all time. When other folks talk about throwing crankbaits the talk about chunking and winding, but VanDam and the greats can make it look like they are just chunking and winding when in reality there are nuances that make them the best in the business.

Wrist rolling, pauses, pulls, rips, floats, bumps and runs making that bait hunt. This week Kevin VanDam put on a clinic on how to saturate expansive spawning flats to milk the biggest bass in a fishery from depressions, ditches, stumps and other changes in a huge area.

VanDam was throwing both the Strike King KVD Square Bill 1.5 and 2.5 crankbaits and bumping stumps. when he’d hit a stump he’d give the bait a wrist roll and that wrist roll would trigger big bass to react. He caught big bass, lots of bass and an average of 23 pounds of bass a day from a fishery that had 49 degree water in it a week ago.

If the weather this week was an imperfect storm, VanDam was the perfect storm. He was emotional giving fist pumps leaving the ramp in the morning, when he caught a big bass, when he walked on stage, when he came down for the super six and of course when his name was called as 4-time Bassmaster Classic Champion.

It was awesome to see Brandon Palaniuk get choked up on stage and really feel the moment he had in the spotlight for all the Federation Nation members and blowing Bryan Kerchel’s fish whistle in his memory for being the only Federation Nation angler to ever win the Classic.

Derek Remitz told us at the media day before the tournament that he had gotten a few bites in one area but he had missed them all so he wasn’t even sure they were bass. Turns out they were bedding bass in Cataouatche Lake. He sacked up 26-5 on the last day, learning his area better and how to catch the big fish better. And he had a kicker that weighed 8-4. That’s a pretty amazing tournament. He caught his fish on a Lucky Craft RC 1.5 in Bream color. He caught his fish with a 7-foot St. Croix Glass crankbait rod, 16-pound fluoro.

“I would have been more relaxed and calm,” he said, “but I didn’t know the fishery well so I wasn’t even sure I was fishing around bass.”

Duckett setup outside the wall around Lake Cataouatche and no one else was out there. Late on day two he was flipping a new Berkley Havoc Pit Boss and he caught a big fish and that clued him in to what would be the big final day push. He setup on the spot this morning and caught the big one early. Then lost another big one, he estimated as big or bigger. Then he caught another big one. And it was game on.

“That spot is loaded with big ones right now,” he said. “If I went tomorrow and connected on all of them I could catch a 30-pound limit. I just found these fish too late. But it’s been an amazing tournament. This is a great fishery. Louisiana take care of it!”

Brent Chapman also had an amazing tournament, running to Venice and sacking up fish with very little time on two days of fog delays. Then on the day when he had all day to fish, an influx of coldwater changed the fishing in his area and he only caught average 3 1/2-pound fish and no big kickers. He flipped a Tightlines UV Blue Beaver around mats and Russeau cane. He caught a lot of fish on the final day but could only muster 16-7, his worst day of the event.

Aaron Martens talked very highly about the fishery and the fact that it will soon be kicking out 12- and 14-pounders regularly. He caught an amazing 25-14 limit. But amazingly he finished second for the fourth time in the Classic, a record he’d just assume not have. His day two catch of 12-11 really sealed his fate. He had 20-plus pound weights on day 1 and day 3. But fish came unbuttoned and didn’t get the bait as well on day two, something echoed through out the tournament by many competitors. Aaron caught his fish on a Megabass crankbait rod with 20-pound sunline fluorocarbon. The bait was a shallow crankbait.

“We hit this lake the absolute best week we could have hit it,” he said. “When it warmed up it went above average and that made it above average fishing. Today was one of the best days of the year to be fishing on the Delta.”

But in the end VanDam slammed the door shut with 28 pounds. He looked like a kid about to open his christmas presents on stage waiting for his weight to be announced and the fact that he won for a record-tying fourth time. Now only Clunn and VanDam have won four Bassmaster Classic titles. While Clunn may win some more, it seems hard to believe VanDam won’t win another few himself. He won his first Classic in 2001 on the Louisiana Delta and now he’s won his fourth on the same fishery.