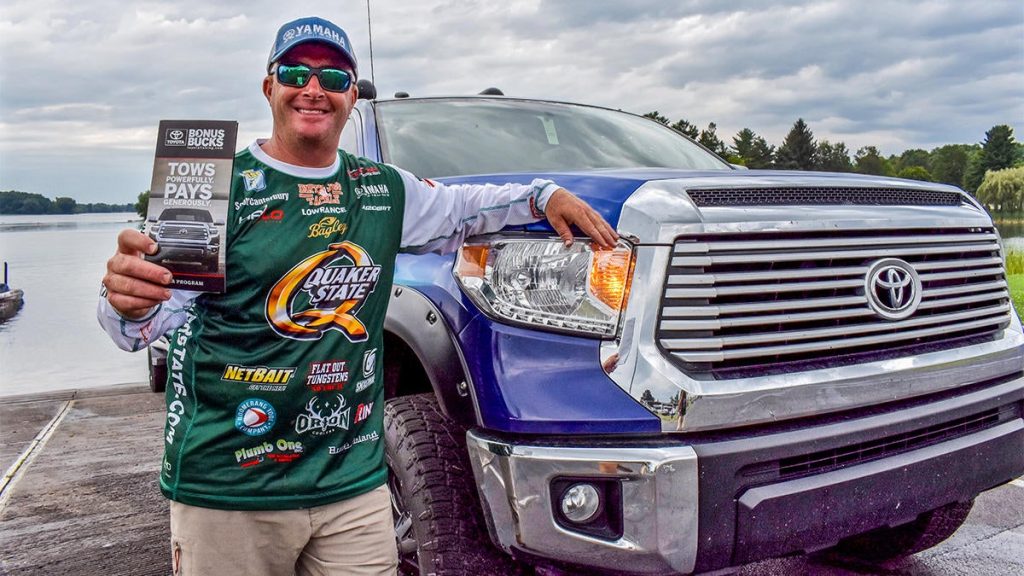 Bassmaster Elite Series pro Scott Canterbury is leaving Waddington, New York heading towards Cayuga Lake with an extra $3,000 of Toyota Bonus Bucks in his wallet thanks to a 3rd place finish this weekend on the St. Lawrence River.

This marks the second time in the 2019 season Canterbury has been the highest finishing participant of the popular contingency program, he earned another Bonus Bucks check for his second place efforts on Winyah Bay a few months ago.

While Canterbury would have loved to capture his first Elite Series trophy this weekend, or back on Winyah Bay, he would gladly trade them both for the Toyota Angler of the Year title at the end of the season. Canterbury currently holds a 17-point lead in the AOY race over Elite Series veteran Bill Lowen.

Canterbury told Bassmaster emcee Dave Mercer he was “just trying to survive” coming in to the St. Lawrence River and keep himself in contention for the Angler of the Year trophy. He had never fished a tournament on this fishery and was nervous the unfamiliarity along with strong currents might throw him a curveball.

The Odenville, Alabama pro drop shotted either a Set the Hook Stumpy Crush Worm and a Drifter to trick 84-lbs and 8-ounces of fat St. Lawrence River smallmouth over the course of four days. Canterbury experimented with several different weight and P-Line Tactical Fluorocarbon line sizes each day until he dialed in what the fish preferred to seize his second top five finish of the 2019 season.

One thing Canterbury wasn’t at all concerned about surviving the 1200-mile haul from Alabama to the St. Lawrence River was his Toyota Tundra. Toyota’s reliability is one of Canterbury’s favorite qualities of his tow vehicle.

“I never have to worry about my truck,” Canterbury said. “As long as you keep up with routine maintenance that thing is smooth and steady. It tows my Skeeter Boat like a dream and gets me to the lake without concern. That peace of mind is extremely important.”

Canterbury left the St. Lawrence River boat ramp with his foot on the pedal of his lead in the Toyota Angler of the Year race and of his Tundra, heading to Cayuga Lake in hopes of keeping the momentum rolling forward.

For more information on the Toyota Bonus Bucks program, click here. There you’ll find a full list of sponsored bass and walleye events, including numerous team trail and regional tournaments. If talking on the phone suits you more than surfing the web, give (918) 742-6424 a call and ask for Kendell.