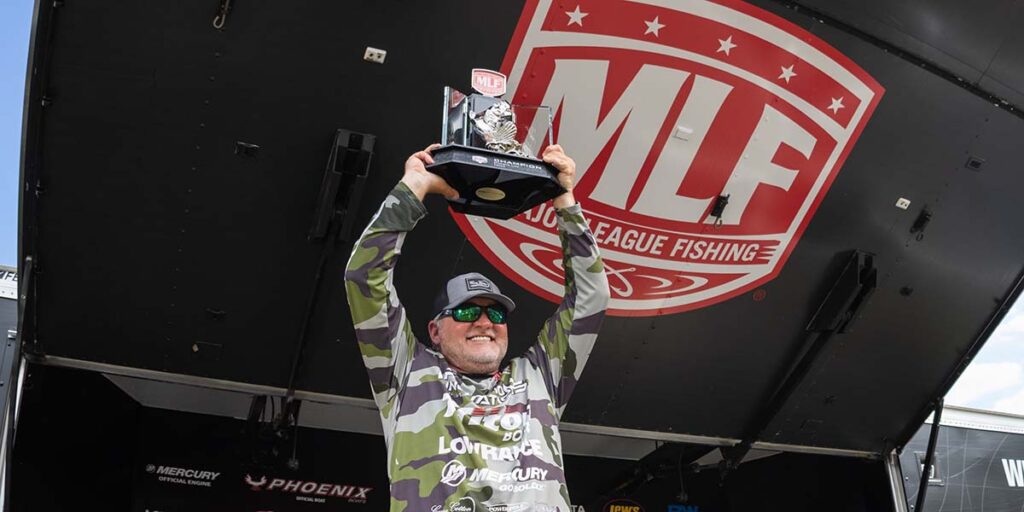 Pro Jon Canada of Helena, Alabama , brought a five-bass limit to the scale Sunday weighing 20 pounds even – his biggest limit of the event – to win the MLF Tackle Warehouse Pro Circuit Lithium Pros Stop 3 at Pickwick Lake Presented by Covercraft in Counce, Tennessee. Canada edged out the second-place angler Abu Garcia pro Justin Lucas of Guntersville, Alabama, by 1-pound, 2-ounces to earn the top payout of $100,000.

After ending Day One in 74th place with only 12 pounds, 13 ounces, Canada weighed in the largest limit of Day Two – five bass totaling 19-15 – to catapult into seventh place. He brought another solid limit of 17-8 to the scale on Day Three, putting him in third place and qualifying him into Championship Sunday.

“This win is just the good Lord above, I don’t know what else to say – It was just meant to be,” Canada said. “I came here and practiced for two days when the water was down, idling up and down this thing – marking every stump, shell bed, everything you can think of on a 5- to 8-mile stretch of the river and I ended up catching them in some of the areas where I did my homework.

“I spent most of the event fishing around the same areas as Lucas and (Andrew) Loberg , just fishing a little bit of grass and isolated stumps,” Canada continued. “I caught two of the biggest bass I’ve ever caught on Pickwick in this one area during pre-practice for another tournament – a 7-pounder and an 8-pounder.

“I only had two fish at lunchtime on Day Two and decided to change it up and run out to that spot. I’m not typically a drop-shot guy, but if it works, I’ll do it. I pitched the first couple stumps and had 19 or 20 pounds within 40 minutes, and I knew there was something special going on.”

With weights zeroed on the final day, the tournament was anyone’s to win, but Canada found himself trailing behind Lucas in the number two spot on the unofficial leaderboard throughout most of the day.

“I felt like the stumps I’d been fishing had a little extra pressure yesterday,” Canada said. “I could see the fish, but they wouldn’t bite and just kept running around and picking at my worm. I decided to idle to a new spot today that I’d never fished before, marked about 20 stumps and caught two big ones.”

This last-minute move upriver proved very profitable for the Alabama pro, who caught a good kicker fish in the final hour of Championship Sunday to finally push him over the top.

“Catching that fish this afternoon absolutely saved my tail,” Canada said. “I didn’t realize it was the winning fish, and knew it was going to be close, but I also knew that it definitely put me in contention for the top spot.”

Canada said most of his fish were caught on isolated stumps in 4- to 8-feet of water.

“I spent the first two days swimming a jig with a Reactions Innovations Twerk on the back of it, white-colored with chartreuse tipped ends, then I flipped a Reaction Innovations Spicy Beaver. I caught a lot on the first day doing that,” Canada continued. “When I went offshore, I threw a shaky head with a Reaction Innovations Flirt Worm , green-pumpkin colored, and caught a 4-pounder. I decided to switch to a drop-shot because it was faster and allowed me to work the stumps more quickly and thoroughly.”

Canada said he’s been fishing pretty good this year, but everything just finally came together during this event.

“The win hasn’t really sunk in yet,” Canada laughed. “It feels great to finally win one. This has been a long time coming.”

The top 10 pros at the Lithium Pros Stop 3 on Pickwick Lake finished: