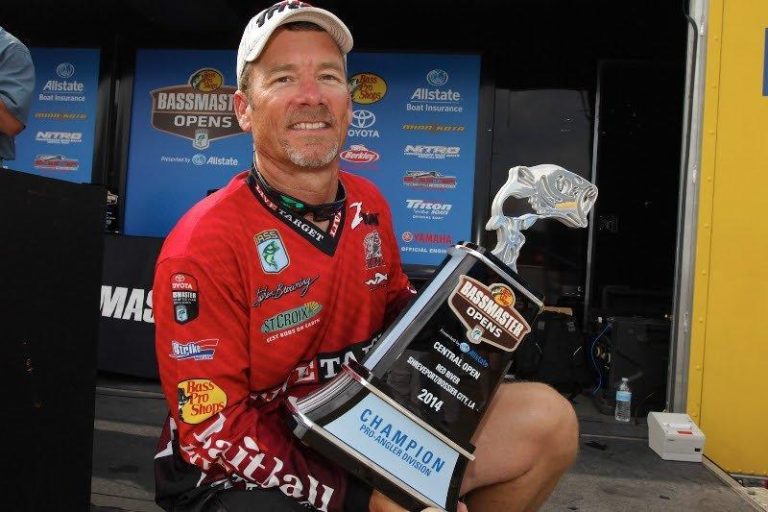 Stephen Browning’s home water is the Arkansas River, but he might want to consider relocating to the Red River.

For the second straight year Browning has won the Bass Pro Shops Bassmaster Central Open on the Red River. In 2013, he rallied from 12th place to first on the final day, but this year he only had to climb from second place to repeat as the Open champion.

The Bassmaster Elite Series pro finished with 44 pounds, 3 ounces earning the top prize of a Nitro Z-9/Mercury 225 Pro XS valued at $40,000 and $7,765 in cash. He received the Toyota Bonus Bucks prize of $1,500 for being the highest placing eligible Toyota pro, and he also earned the Power-Pole Captain’s Cash award of $500.

Aaron Johnson, of Shreveport, La., also earned a Toyota Bonus Bucks prize of $1,000 for being the second-highest placing Toyota pro.

The area Browning caught all of his big fish on the final day of the tournament in 2013 proved to be the key spot for Browning this year also. The Arkansas pro started Saturday with a small limit while his co-angler partner, Keith Glasby, of Ovilla, Texas, got off to a fast start.

“Keith (who won the co-angler division) was putting it on me pretty hard and heavy, and I just kept telling myself to just breathe,” Browning said. “It was one of those deals where you have an area and a bait that you have a lot of confidence in, but if you start to scramble you are more than likely going to tank. I just kept that little plug in my hand and kept winding it around.”

Browning remained patient knowing that the sun would position his fish close to the wood cover from about 10 a.m. to 2 p.m. “There was a magic moment of about 30 to 45 minutes when it all happened,” said Browning, who was able to cull all of the fish he had caught earlier.

On Thursday, Browning caught most of his fish on a 1/2-ounce chartreuse-and-white War Eagle spinnerbait when the wind was blowing. But when the skies turned sunny and calm on Friday and Saturday, Browning relied on the same lure (a sexy shad 3.5-inch square-bill crankbait) that made him a winner last year.

“I pretty much stuck with the same thing (all three days),” said Spohrer, who finished with 40-12. “I didn’t scramble as much today as I had been doing the last couple of days.”

“My bread and butter was a little Bandit Series 100 crankbait in chartreuse with a black back,” said Glasby, who also won the 2012 Open as a co-angler at Lewisville Lake. “Today I switched up fishing behind Stephen Browning who is so efficient, so I went with a little (Carolina) rig with a Senko on it.”

Catching a 7-13 largemouth earned Johnson the Carhartt Big Bass of the tournament award of $500.