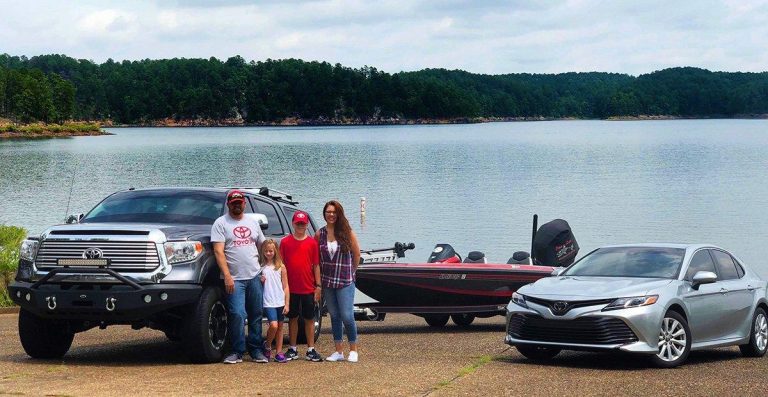 Israel “Izzy” Mills grew up near Beckley, W.V. sensing there might be a better quality of life beyond the coal mines of his home state. So when a job opportunity with the Army Corps of Engineers developed 13 hours away at Lake Ouachita near Mount Ida, Arkansas, he set the hook, and now works proudly as a hydroelectrician, helping supply power to many portions of the Southwest.

He also sensed there might be a better brand of truck than what he currently owned after attending his first Toyota Bonus Bucks Owners event at Lake Norman in 2012 as a guest of his fishing buddy Joel, who was already a registered Bonus Bucks member.

“My dad has owned Toyotas since 1982, but I strayed for a number of years and drove other brands,” admits the 41-year-old.

“After a handful of failed transmissions and leaky rear seals, I got mad and started thinking Toyota might be a better option. And right about that same time, I went to that Bonus Bucks event at Lake Norman and saw how incredible Toyota treated all of us anglers, so I traded for a Tundra a few weeks later,” explains Mills, who served America for four years of active service in the U.S. Air Force, and three more years in the Army National Guard.

His satisfaction with his first Tundra was so immediate, he went out and bought a second Tundra for his wife Frankie Jo, and has since traded for a newer 2017 Tundra for himself, and a 2018 Camry for her.

“I love Toyota’s dependability, and I love their towing power. It’s as though a Tundra was born to tow a bass boat,” says Mills, who cashed a number of Toyota Bonus Bucks checks by doing well in the Arkie division of the BFL league, as well as the Arkansas Bass Team Trail.

Not only has the Mills family returned to Izzy’s dad’s longtime loyal roots to Toyota, but they’ve also become consistent competitors in the annual Toyota Bonus Bucks Owners event, ever since “Izzy” first competed as a guest at Lake Norman six years ago.

“This year, I’m bringing my 13-year-old son Jacob to the Bonus Bucks Owners Event at Table Rock in October. He’s just getting into bass fishing, and it will provide him a chance to meet all the Toyota pros he watches on TV, as well as to see how the bigger tournaments I compete in work,” says Mills.

While “Izzy” says many of his favorite days of bass fishing take place in the winter, throwing a heavy jig to deep brushpiles on Lake Ouachita, his son Jacob is pretty fond of a Rat-L-Trap.

On October 28th, the father and son team hopes to do well on Table Rock at the 7th Annual Toyota Bonus Bucks Owners event, but one thing’s for certain, their loyalty to Toyota is sure to continue running deeper than a West Virginia coal mine.

To register or learn more about Toyota Bonus Bucks and the 7th Annual Toyota Bonus Bucks Owners Tournament on Table Rock Lake in October, visit Toyotafishing.com; call Kendell at (918) 742-6424, or send her an email to kendell@dynamicsponsorships.com