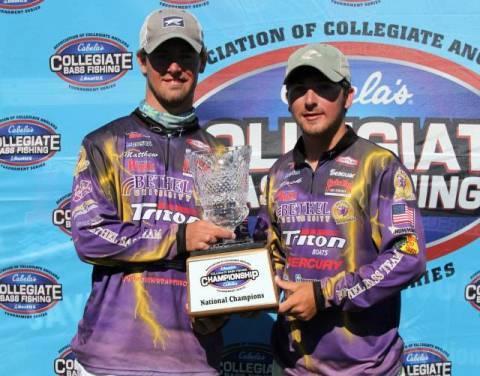 Bethel University began and ended in the lead of the BoatUS Collegiate Bass Fishing Championship; however, it was Zack Parker and Matthew Roberts who ultimately hoisted the trophy.   The team rallied from sixth place to overtake fellow Bethel University teammates Cody Ross and Dewey Swims, who began day two as the leaders.   Parker and Roberts did it with the heaviest catch of the event, 25.88 pounds.   Their two day total was 46.76 pounds, a new BoatUS Collegiate Bass Championship record.

The duo did it by plying deep shell beds of Lake Pickwick with Strike King swimbaits.   According to Zack, the key to success was their research with electronics.   “We spent nearly all of our practice idling and scanning structure.   When we did find a school, we’d just make enough casts and catches to figure out the size of fish that were holding there.”   Apparently the strategy was very successful.   Partner Matthew Roberts added, “We ended up with about four or five different schools and we just kept rotating through them.   We felt like they were always biting somewhere, so we’d hit a spot for 15 or 20 minutes.   If they weren’t firing at that time, we’d move on to the next one until we hit on the right fish at the right time.”

Their timing and persistence was good enough for the tournament’s largest bag of fish and the day’s largest bass at 7.87 pounds, both of which were also ACA records.   Their haul netted them a $5,000 first place prize, a new Hydrowave, the Daily Berkley/Abu Garcia Big Bass Award, as well as the Costa Overall Big Bass Award.

For the second year in a row, Joe Slagle of Tennessee Tech University was the second place boater.   This year he did it with a new partner, Cliff Dye.   The two were able to top last year’s performance by over three pounds, weighing in a total of 44.27 pounds.   When asked about finishing as the runner-up two consecutive years, Joe said, “It stings a bit, but I’m pumped.   We locked up to Wilson and fished the Wheeler tailraces again and had a great event.   Really everything worked out perfect.   We executed well and didn’t lose anything that would have made a difference, so I’m satisfied.   We just needed one more big bite and it just didn’t come for us.”   Cliff echoed Joe’s sentiment, “We really wanted to win, especially for Joe after he was so close last year.   In the end we made the right decisions and fished really well together, it just didn’t work out quite right.”

Despite finishing second, the teammates netted more than first place money.   Thanks to the ACA and their sponsors, Slagle and Dye loaded up on contingency prizes and bonuses.   They took home $2,500 in second place prize money, a $500 ACA contingency bonus, a $1,000 BoatUS Weigh to Win bonus, a $1,000 Cabela’s Angler Cash gift card bonus, a $1,000 Yamaha bonus, a $1,000 Ranger Cup University bonus, a $250 Berkley bonus, as well as a new Hydrowave.   Collectively their catch was worth over $7,500 in cash and prizes.

The rest of the Top 5 included:

Full results can be found at CollegiateBassChampionship.com and additional details of the rest of the top patterns will be revealed in the coming days.