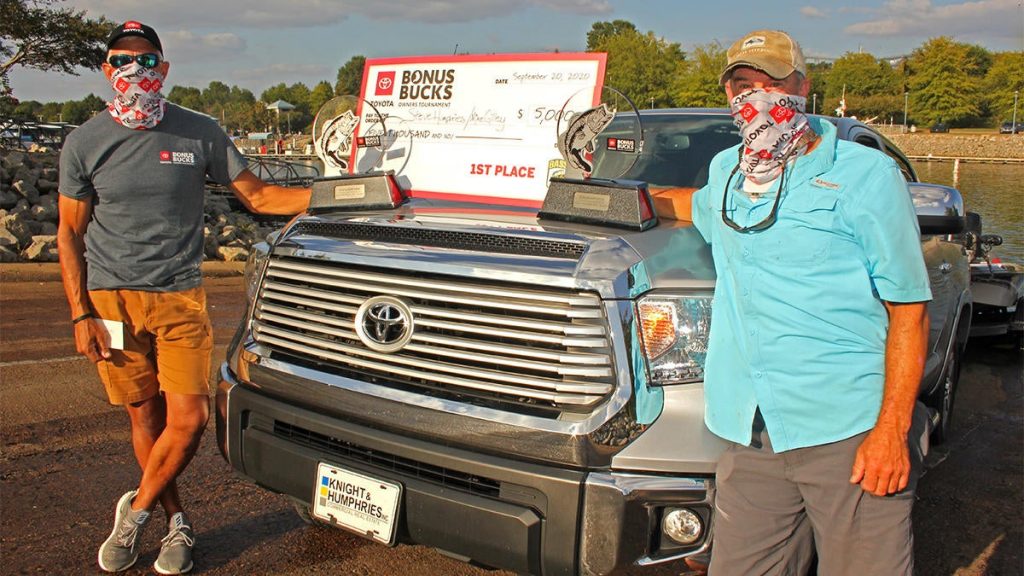 Steve Humphries and Mike Gilley are best buddies, neighbors, and tournament fishing partners of 15 years, and now they’re the champions of the 9th Annual Toyota Bonus Bucks Owners event held this year in their hometown of Florence, AL on the famed waters of Pickwick Lake.

Gilley, a former Canadian Football League wide receiver and now retired schoolteacher, and Humphries who works in commercial real estate, brought 19 pounds of Tennessee River smallmouth to the scales for the $5,000 win in the no entry fee event. They caught their admirable limit early on a locally made ¾-ounce Johnston Lures football jig.

“We fished the Bonus Bucks tournament last year too. I drive a 2017 Tundra that I’ve never had to take to the shop for a repair, and Mike owns a 2012 Tundra. We really believe they’re the best trucks we’ve ever owned, and this is such a well-run, first class event,” says Humphries.

The biggest bass of the tournament was not bronze-colored, but instead a fat green 7-pound 7 ounce largemouth that Dale Pelfrey of East Tennessee caught, and was awarded a $1,000 Carhartt prize pack for his memorable catch.

This year’s event had 246 registered teams that guarantees a paycheck to the Top 31 teams in which only one team member is required to be a registered Toyota Bonus Bucks member.

Several stringent precautions were taken to assure a safe event amid the current pandemic, the weather was judged perfect, and cheerful attitudes were plentiful at what has become a treasured event for hundreds of loyal Toyota anglers each year.