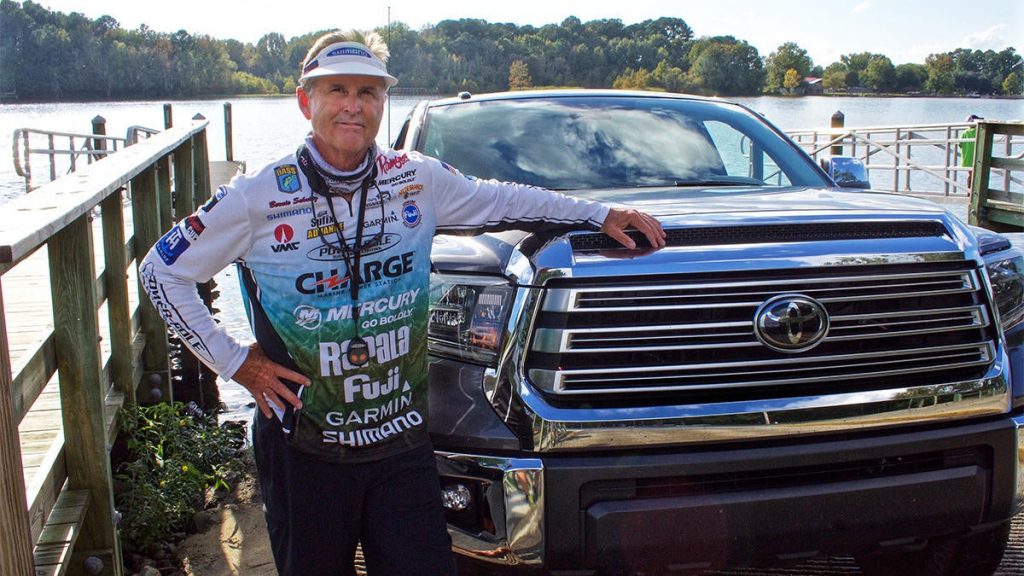 His efforts hauled in the $3,000 Toyota Bonus Bucks payout and further cemented his claim to the best-looking visor on the Elite Series. The Gainesville, Florida pro has long been considered one of the good guys of the sport and it’s great to see him near the top of the leaderboard.

Schultz primarily relied on a weightless 5-inch watermelon / green pumpkin laminate Yamamoto Senko he wacky-rigged to catch fickle bass smack dab in the middle of their fall transition. He used a VMC Ike Approved Weedless Neko Hook for the business end of his setup and fished extremely slow to get more bites than his competitors.

After towing with a suburban for most of his early career, Schultz made the switch to a Toyota Tundra several years ago and hasn’t looked back. Saying the towing power and dependability of a Tundra have won him over.

“I’ve never owned a more reliable tow vehicle,” Schultz said about his 2018 Tundra. “I’ve owned two Tundras now and all I’ve ever had to do is buy gas and windshield wipers. That’s it. The truck is truly a workhorse and tows exceptionally well.”

Bernie explained the Schultz family actually has three Toyota vehicles to their name and they are all pleased with their choices. His wife drives a 4Runner, his son sports a Highlander, and he drives a Tundra.

Fortunately for you, it doesn’t take a top finish against some of the best bass anglers in the world to reap the rewards of Toyota Bonus Bucks. The popular contingency program supports hundreds of bass and walleye tournaments of all levels, including team tournaments and college series events.

As long as you own a Toyota tow vehicle that is five years old or newer (2016 or newer) and you are the highest placing registered participant in a Bonus Bucks supported event you are eligible for payouts. For a full list of events, program rules, or to get registered head to https://www.toyotatrucksbonusbucks.com/.

For any questions or comments reach out to Chip or Kendell at Bonusbucks@dynamicsponsorships.com and they’ll help you out.