Berkley released several new soft shapes in their PowerBait and Havoc lines of baits on their Berkley-Fishing.com website this week. Videos and clips of the baits have started leaking already so we’ll spill the beans as well. There were four shapes in the Havoc line that caught our eye and two in the PowerBait line that looked really appealing for bass fishing anglers.

The Havoc Beat Shad features a ribbed body that tapers to a thin tail with a boot at the end. It looks like it would be a good bait for umbrella rigs, under spins or on a weedless weighted hook around grass. The bait is 4-inches long, comes 8 to a pack and is available in 8 colors for $2.99 a pack on Tacklewarehouse.com.

The Havoc Federale is a 10-inch worm with a rib mid section for light weedless rigging but good hook penetration on a long hookset as is often the case when fishing big worms offshore for bass on ledges and deep points and humps. The worm comes 5 to a pack and is available in 12 colors for $2.99 at Tacklewarehouse.com.

The Havoc The Jerk is a 5-inch jerkbait with a sub-divided tail section and sideways paddle tail that should give it both a good swimming action as well as a good jerk action. It can be burned over grass or jerked and twitched deeper. The baits will come 10 to a pack in 12 colors for $2.99 at Tacklewarehouse.com.

The Havoc Papa Sick Fish is the big brother of their Sick Fish bait they released a few months ago. This larger version will be nice for guys wanting to throw a larger swimbait both weedless and in open water. Just as a side note for all the folks saying Berkley stole this design from Little Creeper. That is incorrect. Little Creeper gave Skeet permission to take the design to Berkley to be mass produced. Little Creeper uses a different formulation of plastic and the baits are still very different with different colors and prices. It was a mutual agreement between both parties. This new larger size will be sold 1 to a pack in 12 colors. The bait is 5 1/2 inches long and sells for $2.99 on Tacklewarehouse.com. 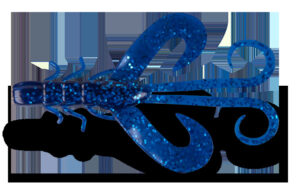 On the PowerBait side, they released another Chigger line bait called the Chigger Quad. It’s a cross hybrid bait that is part craw trailer and part twin tail grub. The flatter appendages and added tentacles should give the bait a lot of action as both a trailer and a flipping bait. The bait comes in 12-colors in an 8-pack of 4-inch baits. These baits are also available now at Tacklewarehouse.com.

The other cool new shape from Berkley PowerBait is a finesse worm called the Rib Snake. The Rib Snake is 5.5 inches long and comes in 11 colors including my personal favorite, green pumpkin blue fleck. The bait features a tapering ribbed body with a small paddle tail at the end. A solid head will aid with rigging and should be a great finesse bait for guys that love the PowerBait flavor. The baits come 8 to a pack for $4.49 at Tacklewarehouse.com.