Honoring two pro anglers, a successful bass fishing industry entrepreneur, and an exceptional writer on the bass fishing scene, the Bass Fishing Hall of Fame (BFHOF) Board of Directors announced today the Hall’s 2015 inductees. Recognized for their impact upon and their support of both professional anglers and recreational bass fishing during their careers, the 2015 class includes Harold Allen, a pro bass angler and Toledo Bend guide, William â€˜Billâ€™ Huntley from Bumble Bee Baits and T-H Marine fame, B.A.S.S. and FLW Tour pro Stacey King, and also award-winning journalist Don Wirth, best known his work in Bassmaster Magazine for more than 40 years.

All four honorees will officially become members in the Bass Fishing Hall of Fame at the organizationâ€™s annual induction dinner taking place Thursday, February 19 in Greenville, S.C., the evening prior to the first tournament fishing day for the 2015 Bassmaster Classic.

â€œThese four gentlemen have all lived their lives with the best interests of the sport of bass fishing always front and center,â€ said BFHOF president Sammy Lee. â€œOn behalf of the members, past inductees and board of directors of the Bass Fishing Hall of Fame, I commend Harold, Bill, Stacey and Don for their contributions to the sport. The are all very deserving, and we hope all the fans of the sport of will join us in celebrating their induction with them this coming February.â€

In addition to the formal induction ceremonies, the Bass Fishing Hall of Fame’s annual dinner also includes an exceptional silent auction featuring bucket-list fishing trips, premium rods and reels, hunting gear and special fishing-celebrity memorabilia. Specific details on the dinnerâ€™s location and time will be announced at a later date â€“ visit BassFishingHOF.com or the BFHOF Facebook page for more details, or call 888/690-2277.

HAROLD ALLEN – Known affectionately as â€œThe Legend,â€ Allen was one of the original members of the â€œHemphill Gangâ€ of professional anglers and guides on Toledo Bend Reservoir. He competed in 263 B.A.S.S. tournaments, winning one and finishing in the Top 5 in four out of the 15 Bassmaster Classics for which he qualified.

Runner-up in the â€™81 Bassmaster Classic on the Alabama River by less than a pound to Stanley Mitchell, Harold finished â€˜in the moneyâ€™ 115 times in his career B.A.S.S. events, including 61 Top 20 rankings. He continues to compete in FLW tournaments. One of the pioneers in deep-water structure fishing, Harold shares his expertise in plastic worm fishing with thousands of anglers during his guided fishing trips, seminar lessons and video programs.

WILLIAM â€˜Billâ€™ HUNTLEY – Huntley and his wife Pat started Bumble Bee Bait Company in 1967, making spinnerbaits and jigs at night on the kitchen table. Bill had several sales reps helping to sell his lures even though their primary business was to sell parts and accessories to the marine industry.

Bill realized there were many items he could use in his boat that simply were not available. He began to manufacture those needed parts and found much success in the marine industry. After selling Bumble Bee Baits in 1983, Bill remained in the marine industry and became a partner of T-H Marine Supplies, basically a small machine shop with one product to sell â€” a power trim switch for outboards that mounted on the throttle/gear shift handle. The second product T-H Marine introduced was a foot-operated trolling motor control switch. Today, the company is one of the largest manufacturers of accessories for the boating industry in the United States.

STACY KING – King has bass fished since he was big enough to hold a rod and reel, and guided on his favorite body of water â€” Table Rock Lake â€” for many years.  He became excited about tournament fishing about the time Ray Scott started B.A.S.S.   Stacey competed in local and regional tournaments until the early 1980s when he began fishing B.A.S.S events. He qualified for 12 Bassmaster Classics, and has also fished the FLW tour where he has qualified for four Forrest Wood Cups.

Stacey served on the Bass Fishing Hall of Fame and the Professional Anglers Association boards of directors. He won the BFHOF tournament on Lake Ouachita in 2001 and the PAA tournament on Table Rock Lake in 2011. King is also known for appearing often on fishing shows, specifically â€œThe Bass Prosâ€.    As much as catching fish himself, Stacey enjoys working with kids and teaching all ages about fishing. 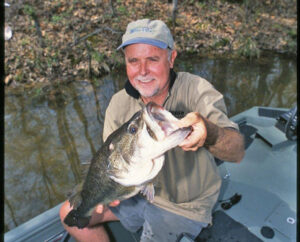 DON WIRTH – Wirth is one of the most prolific writers on the bass fishing scene. His articles and photos appear regularly in Bassmaster, B.A.S.S. Times, Outdoor Life, Field & Stream, In-Fisherman, North American Fisherman, and other outdoor publications. A winner of numerous awards for his writing, photography and video work in his 40-year-plus career, Don also consults in the bass boat industry. A resident of Nashville, Wirth sold his first article to Bassmaster Magazine in 1970 and has written for virtually every issue of this publication since. Among Bassmaster readers, heâ€™s perhaps best known for his humor series â€˜The Adventures of Harry â€™nâ€™ Charlie,â€™ but his other columns â€“ â€˜The Weekend Angler,â€™ â€˜Bass Fishing Basicsâ€™ and â€˜A Day on the Lake with a Proâ€™ â€“ have made him a favorite of pros and other bass anglers throughout the world.