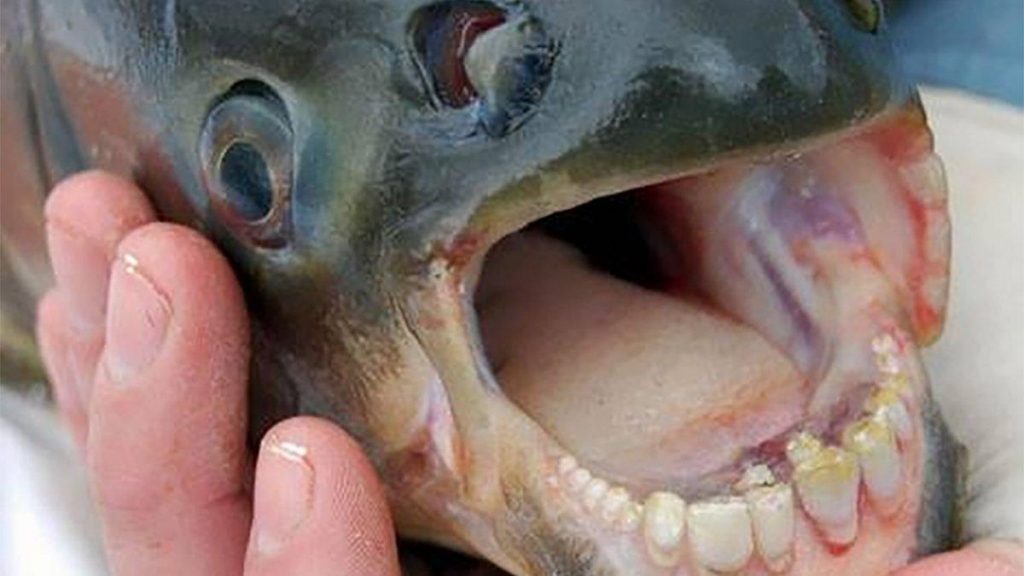 This is a pretty crazy story we ran across over the weekend: Michigan anglers are beginning to catch pacus—fish with human-like teeth—on a semi-regular basis in the southeastern part of the state.

Their strange teeth are actually used for eating nuts and seeds, but after an episode of “River Monsters” with Jeremy Wade, they gained a reputation for eating male genitalia in Papua, New Guinea. Snopes.com reports that this claim is  “mostly false”.

In 2001, a pacu reportedly bit a male on the genitals and a woman on the leg. But no deaths have occurred.

These fish, however, are a distant cousin of the piranha and are commonly imported from South America for aquarium use. While they are non-native, they’re not quite considered an invasive species due to the lack of research on the fish’s negative environmental impacts. Michigan DNR officials believe that these fish will not survive the region’s harsh winters.

More than likely, the red-bellied pacus that have been caught were released from previous owners. They can grow up to 30 inches in length and tend to be aggressive in an aquarium setting, so it makes sense that owners become overwhelmed and release them into the wild.

Doing so without a permit is illegal, according to Nick Popoff, manager of the DNR’s Aquatic Species and Regulatory Affairs Unit. Red-bellied pacu catches have been reported from 27 states across the country.

So it goes without saying: Don’t throw your pet fish into lakes. But we can’t help but wonder how they’d fight on an ultralight rod!

Have you caught a pacu while fishing in your local lakes?