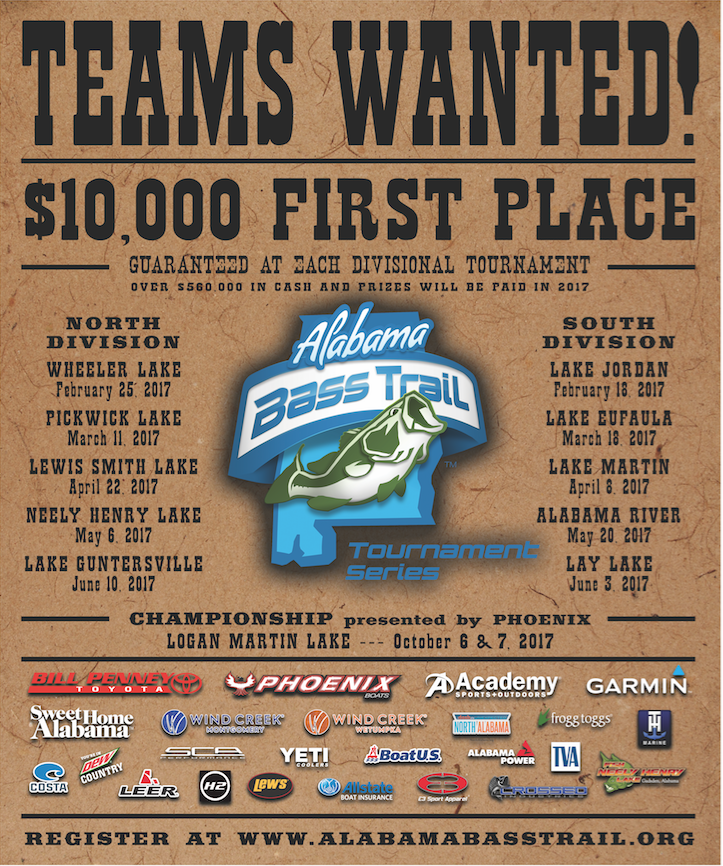 Sanctioned by BASS (Bass Anglers Sportsman Society), the Alabama Bass Trail Tournament Series contains two divisions: North and South. Each division is made up of five tournaments on five different lakes. The maximum number of boats for each tournament is 225. Teams must fish in all five tournaments in their respective division; no single entries will be allowed.

Anglers who fished all five events in their respective divisions in 2016 will be given a priority entry period from August 1 to August 14, 2016, to register online at www.alabamabasstrail.org. Registration will be open to the public on August 15, 2016. The entry fee per tournament is $1250 per team, which includes registration for all five tournaments in the respective division. Each team may choose to pay a $500 non-refundable deposit to hold the team’s spot. The balance of $750 must be paid by January 15, 2017.

Each tournament will feature a NEW increased payout with a $10,000 guaranteed first place prize and will pay 40 places totaling over $47,000. The winning team of the championship will walk away with a fully rigged bass boat valued at $45,000, and there is a $5,000 bonus cash prize for Angler of the Year and $2,500 for runner-up Angler of the Year. Over $566,000 in cash and prizes will be awarded when the Alabama Bass Trail Tournament Series wraps up its season in 2017. “We are excited to announce a new payout for the second time in four seasons. We are blessed with great sponsors and a dedicated group of anglers and this new increased payout is a step in showing our current anglers and others that we want to be the best team tournament trail in the country,” said Kay Donaldson, ABT program director.