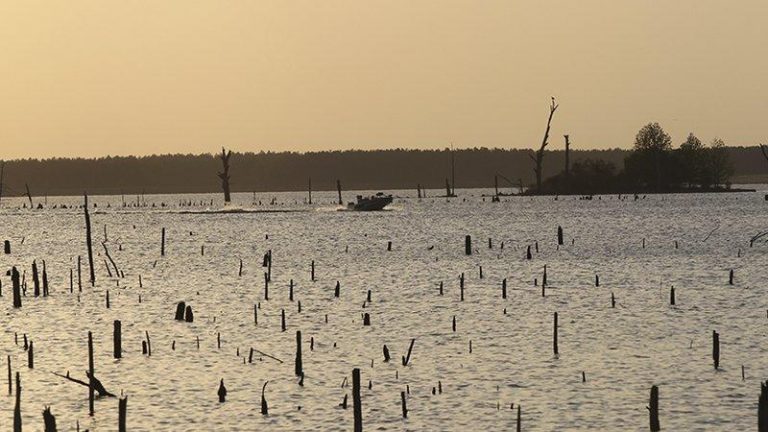 The Director of the Arkansas Game and Fish Commission removed all daily sportfish limits and length limits on Lake Monticello for all species of fish in an emergency proclamation today as a result of the recent decision by the City of Monticello to drain the lake for repairs to its dam.

The City of Monticello has decided to drain the lake to repair issues with portions of the dam sagging, which could indicate issues with structural integrity. Lake Levee Road was closed to all traffic, including vehicles, ATVs and even foot traffic, on July 15, and the levee was inspected by geologists and engineers to determine the extent of the damage to the dam.
The lake was partially drawn down in fall 2017 to repair issues with the dam, but those repairs have not corrected the issue, prompting the city to open the spillway and allow water to drain from the lake and remove the pressure on the dam until it can be repaired.

As a result of the lake being drained, the AGFC is removing all limits to all species of fish so anglers can make use of the resource before it is gone.

“With the water level dropping and high water temperature, we will see a fish kill at Lake Monticello,” said Jason Olive, AGFC assistant chief of fisheries. “We want people to be able to use those fish instead of them going to waste.”

Anglers still will be required to have a fishing license and obey all fishing regulations other than daily limits and length limits.

Olive says the city’s decision to drain the lake should be looked at by anglers with excitement about the future.

“Lake Monticello was once the place to go if you were looking for big bass or excellent crappie fishing, but it’s well past its peak in that regard,” Olive said. “While it is drained, we are going to remove all undesirable species from standing water and the creek channel and start with a clean slate. We’ve done habitat work at Monticello in the past, but this will enable us to do much more once the lake is drained and we are able to see what steps we can take to improve the fishery for the future.”

Contact the Monticello Regional Office at 877-367-3559 for more information.