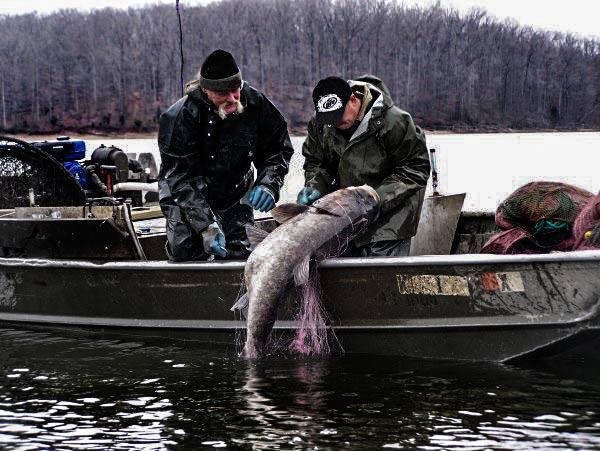 Congrats to commercial fisherman Barry Mann, who caught 28,669 pounds of the biggest nuisance fish, the Asian carp in the Carp Madness tournament held out of Kentucky Dam Marina Wednesday and Thursday March 12-13.

Second Place winner was Heath Frailley with 22,005 pounds, and third place was taken by Owen Trainer with 7,788 pounds.  Nearly 83,000 pounds of carp were brought to the scales in the two-day tournament aimed at putting a dent in the flourishing populations of dangerous nuisance fish that have been streaming down the Ohio, Tennessee and Cumberland rivers at an alarming rate.

There are markets opening up for the usage of Asian Carp for fertilizer, pet food and now human consumption as well. The tournament hosted taste tests at Kentucky Dam Village Restaurant. It’s a great start to the erradication of a fish that does not belong in our waterways. They decimate shallow areas, run gamefish out of their natural habitat and worst of all jump out of the water and into oncoming boats of anglers and recreational water enthusiasts. There have been several deaths from flying Asian carp hitting boat drivers and riders on many waters in the US.

Hopefully this organized effort by the Kentucky Department of Fish and Wildlife will spur a movement to get these fish populations thinned out. If you’d like to get involved you can start by making a small donation to the Invasive Aquatic Species Fund at  http://www.kentuckywildlife.com/Donate.aspx.  For more information about this tournament visit  http://fw.ky.gov/carpmadnessinfo.asp.