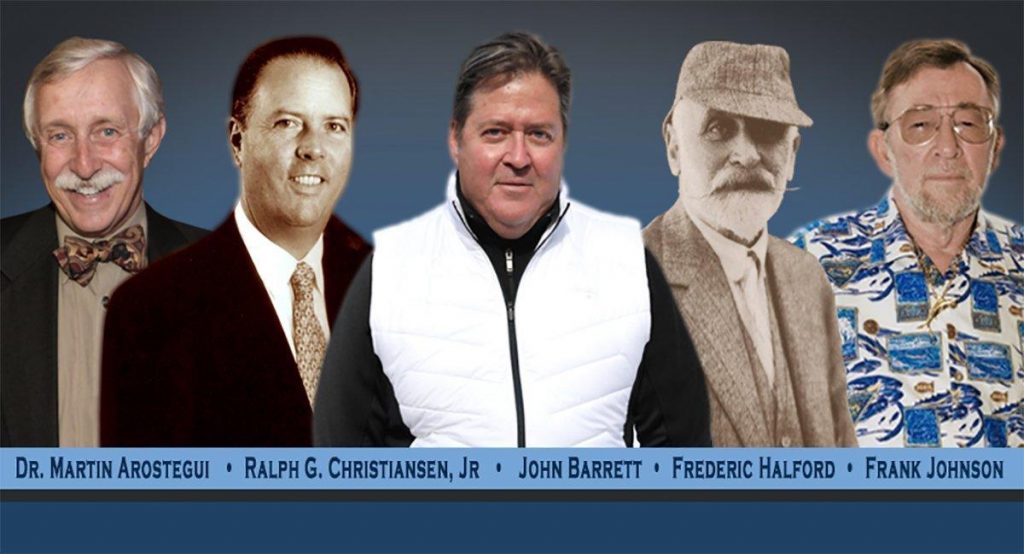 “The IGFA Fishing Hall of Fame honors recreational angling and game fish conservation leaders who have made major contributions to our sport,” said IGFA President Nehl Horton. “From innovative advancements in equipment and techniques to unmatched individual angling achievements, each of the 2018 inductees have written their own chapter in fishing history and their stories will be celebrated for years to come.”

Marty Arostegui holds more IGFA World Records than any other person in the history of the sport. He has fished since the age of three beginning in Cuba and then Miami, where he moved as a child. Perhaps his crowning achievement is becoming the first person ever to achieve the coveted IGFA Billfish Royal Slam on fly tackle.

In addition to his personal achievements, Arostegui has led his family to hundreds of IGFA and International Women’s Fishing Association (IWFA) records. Serving as an IGFA Trustee since 2012, Arostegui loves giving back to the sport by presenting seminars on the ecology of the Everglades and writing articles in English- and Spanish-language fishing journals with a focus on conservation methods, the use of circle hooks and fishing techniques for everything from bream to marlin. Arostegui resides in Coral Gables, Florida, and enjoys spending his time traveling and fishing with his family.

In 1989, John Barrett began creating television programming that would change the face of outdoor television. It began with a series titled, “Fly Fishing the World,” an award-winning project that was the first fly-fishing-only television series ever produced. The show began airing on ESPN in 1990 and became one of the most popular outdoor programs for more than 22 years, exposing the greatest fly-fishing locations on earth to millions of viewers worldwide.

Barrett spent his adult life searching the world for anything that could be caught on a fly rod. Along the way he was joined by recognizable names such as Robert Duval, Kevin Costner, Liam Neeson, Walter Payton, Chris Evert, John Denver, Henry Winkler, and Michael Keaton, just to name a few. The success of “Fly Fishing the World” on ESPN led to the network requesting more productions from Barrett, which led to “Fly Fishing America,” “Trout Unlimited“ television, the “Fly Fishing Masters,” “L.L. Bean’s Guide to the Outdoors,” and other specials and series that included fly fishing as a core part of the projects. Barrett was also instrumental in the inclusion of fly fishing in ESPN’s Great Outdoor Games.

After more than 22 years of traveling the world, Barrett quietly walked away from television production when he sold his company. He now resides in Missoula, Montana, with his family, where he continues to fish.

Ralph Christiansen Jr. helped establish the Puerto Rico Game Fishing Association and, at age 30, became the youngest Commodore of the Club Naútico de San Juan. He caught more than 700 Atlantic blue marlin, tagging and releasing most of them. Dedicated to conservation, he implemented a catch-and-release policy on his boat in the mid-1970s that continued throughout the remainder of his life. Christiansen became an IGFA International Committee Representative in 1978 and in 1996 he was appointed as a member of the Board of Trustees. He also remained active with The Billfish Foundation. Christiansen passed away in February of 2009.

Generally accepted as the “father of modern dry-fly fishing” and the “high priest of the dry-fly,” Frederic Halford is most noted for his development of the dry-fly technique on English chalk streams. Born in Birmingham, England, in 1844, his first experience with fishing was in a small pond in London at the age of six. Halford first began fly-fishing on the chalk streams of Wandle at the age of 24 in 1868. At this time, the dry-fly was still in its infancy. In 1879, he met George Selwyn Marryat, with whom he studied and perfected dry-fly fishing technique and practice for the first of his many fly fishing books. Halford was a member of both the Houghton Fly Fishers and the London-based Fly Fishers’ Club. Halford passed away in March of 1914.

Halford is largely credited for bringing casting techniques, equipment, entomological study and imitative fly tying into the forefront in France, Germany, and America, and his correspondence with Theodore Gordon is believed to have initiated an American revolution in modern fly fishing and tying.

You would be hard-pressed to find a successful offshore spread that doesn’t include Frank Johnson’s famous soft-headed Mold Craft lures. An engineer with an aerospace firm, Johnson bought a tool-and-die company in South Florida in early 1970 and began making tackle on the side. His inventions include the aluminum rod butt and certain types of lure keepers, rod holders and outrigger clips. From his mold for a soft-plastic squid came the original SoftHead™ Hooker. In 2007, his Mold Craft Wide Range and Super Chugger lures were named first and second among the top ten lures of all time by Marlin magazine. He also developed the realistic Squirt Squid™, Tuff Hoo and fender teasers.

An accomplished angler in his own right, Johnson caught 1,000-pound marlin, bluefin tuna and countless other billfish. He was also a strong supporter of sport fishing conservation efforts. Johnson was active in the development of Broward County’s artificial reef program, consulted on the development of The Billfish Foundation’s tags and was instrumental in the planning of the original IGFA Fishing Hall of Fame and Museum. For nearly four decades, Johnson was active in encouraging education, advocacy and conservation on the south Florida fishing tournament circuit. Johnson passed away in September of 2016.

“There is no greater reward, honor or recognition in life than to be singled out by your peers,” said Mark Sosin, IGFA member and Fishing Hall of Fame member. “The 2018 inductees are some of the best in our sport and I’m honored their accomplishments are being recognized through membership in the Hall of Fame.”