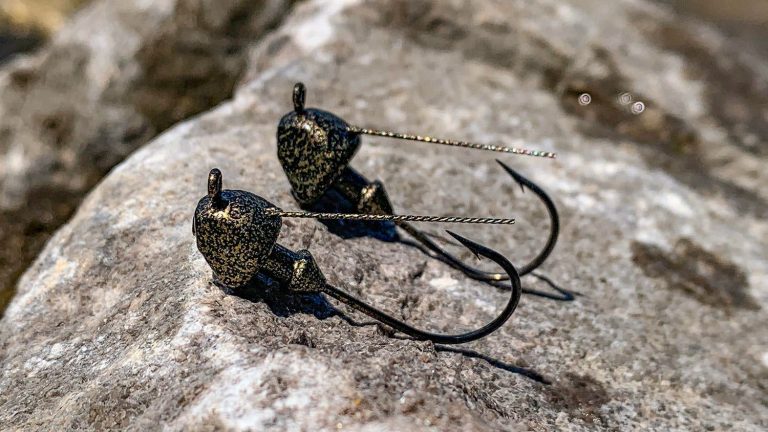 I will admit that I’m late to the Ned Rig party. Largely due to the fact that I never “had” to fish one up until a few years ago. And most of the time I still don’t. But I’d be lying if I said fishing on Kentucky Lake did not get tough at times this year and the only thing I could consistently catch fish during some of those times was a Ned Rig. So I’ve been experimenting with different heads for fishing specific scenarios with Ned rig fishing.

One of the more challenging scenarios for a Ned rig is fishing around boat docks. An exposed hook on a little spiraling hunk of plastic can get your lure hung a lot. But while I was testing the Zoom Beatdown earlier this year, I rigged it up on a jighead my friend Pete Wenners sent me from his new lure company 5 Fish Lures. 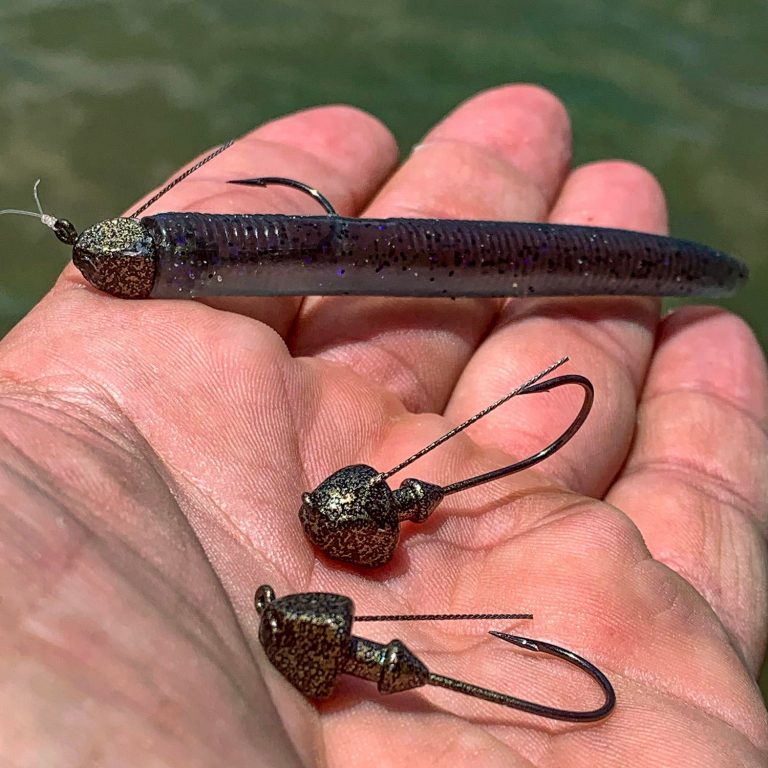 The 5 Fish Lures Ultimate Ned Jig features an angled head design, bulbed collar keeper, but most importantly it has a thin wire weedguard to keep the hook off a majority of snags when fishing around docks and other sparse cover.

The Ultimate Ned Jig comes in 3 sizes—1/8 ounce, 3/16 and 1/4 ounce. It’s powder coated with a durable dimpled head that holds up extremely well fishing it on rocky banks. The Mustad 60-degree crosseye hook is sharp and strong and easily hooks bass on a reel set. The tapered nose reduces snags in brush and rock, and the flat base allows your Ned plastics to stands up on bottom. 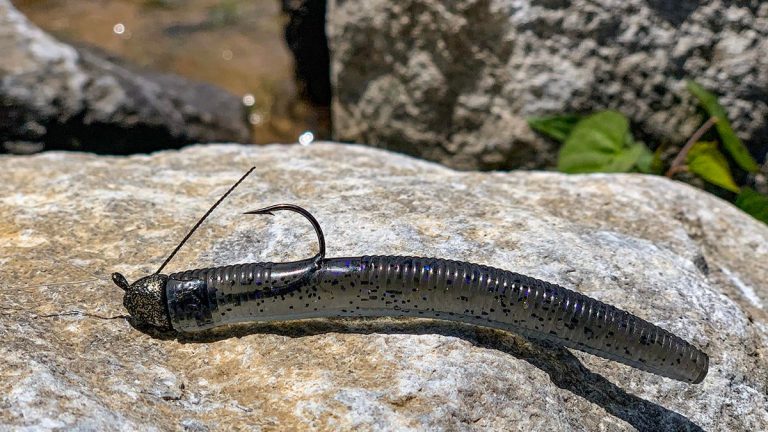 Originally, I put a drop of Super Glue on the collar of a Ned head, so I could fish one bait a lot longer with less hassle. But surprisingly the bulbous collar holds small ned plastics on the Ultimate Ned Jig extremely well even without the glue. You can sling it under docks, drag it on rocks and catch lots of fish on a single bait without having to rethread your plastic constantly.

Action that catches them 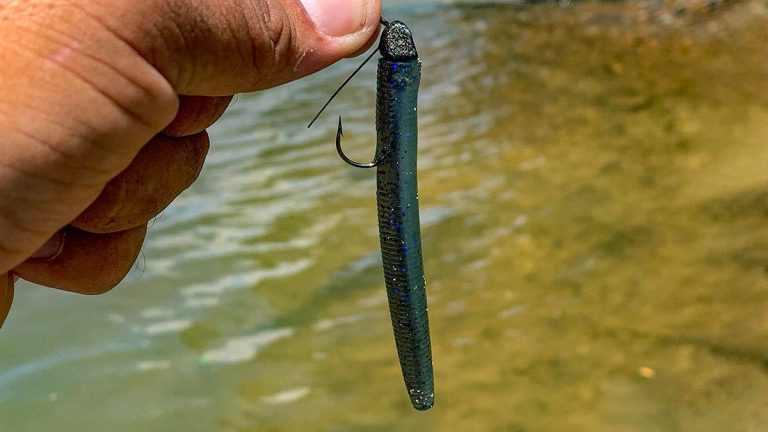 This head gives your Ned rig plastic a gliding fall, that apparently looks very natural to the bass. My biggest fish this summer came on a Ned rig fished around docks. Funny part was I had been fishing glide baits that afternoon and had turned two nice fish but didn’t keep either fish hooked up. Nature of the beast sometimes.

But as I fished down a long row of docks with the glide without a bite, I got to the end and noticed a ton of small shad clouded around the last post. I saw the water boil, so I reached down and picked up a Zoom Beatdown in Electric Shad on a 1/8-ounce Ultimate Ned Head. I pitched this Ned rig into the cloud, and as it was gliding to the bottom, my line snapped up off the water.

I reeled down and leaned into the fish and knew it was a good one. It ran drag out away from the dock and made a few big jumps before I landed it on 8-pound line. The fish ended up going 5-14 on my Rapala High Contrast Digital Scale.

That fish made me rethink my previous notions about only catching tiny fish on Ned Rigs.

I’ve fished the Ultimate Ned Jig in Kentucky, Arkansas and Missouri this summer, and it gets bit in a wide variety of situations. Instead of drop shotting like I normally do in July on Table Rock Lake, I instead dropped a 1/4-ounce Ultimate Ned Jig with Missile Ned Bomb to fish I was seeing on my graph suspended in the tops of trees and around floating dock cables in 30-40 feet of water. It was a very efficient way to catch bass and a great change of pace from how I had been fishing Ned Rigs.

Micah Frazier did a similar thing to win the St. Lawrence River Elite Series event this season where everyone else was dropshotting.

I fished the Ultimate Ned Jig on a shallow lake in Arkansas where the bass feed on a lot of small minnows, and I caught a bunch of bass there just straight reeling and popping a 3/16-ounce Ultimate Ned Jig with a Z-Man TRD MinnowZ on fish that were aggressively chasing small baitfish.

Here on Kentucky Lake, I’ve fished the Zoom Beatdown around docks, on points, on ledges and just going down the bank fishing with the 1/8 or 3/16-ounce Ultimate Ned Jig depending on how deep the fish were.

Details on these unique Ned heads 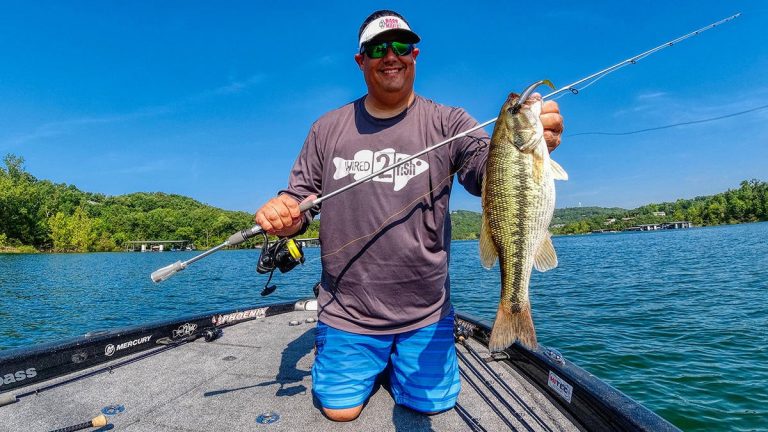 The 5 Fish Lures Ultimate Ned Jig has been hard to get if you don’t live around Table Rock Lake where the head originated, but as of last week they are now being carried online at Walmart.com. You can pick them up there in all three sizes, and they will likely be available online at other retailers soon. They come 8 heads to a pack for $9.49.

I know when I did the original Zoom Beatdown review, I had as many questions about this jighead as I did about the the plastic I was reviewing. So hopefully anglers can purchase them whenever they like online at Walmart.com.