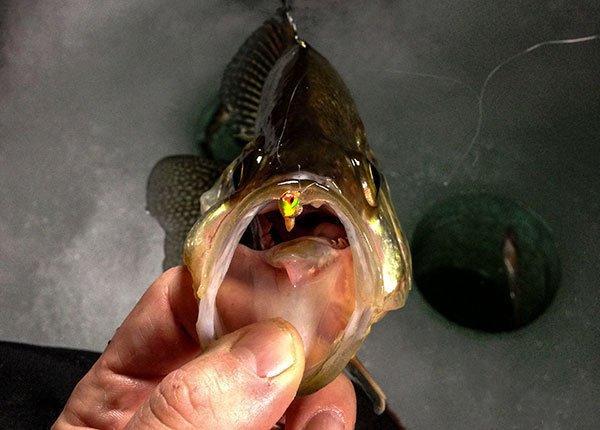 Ice fishing is a big deal in the northern half of the country right now. A good portion of the northern anglers look forward to this time of year but several folks want to try ice fishing without knowing where to start. Todd Hammill is our resident light line ice expert and has been having some good success ice fishing crappie with ultralight tackle. So we thought we’d share his strategy with other ice anglers looking for more success crappie fishing on their local frozen lakes.

There are several key elements to the ultralight system:

“This is a total water displacement bite,” Hammill said. “The lighter the line, the less resistance there will be when the fish sucks the bait in.”

The fish might suck the bait in from 4 inches away or from 4 millimeters away and you’ve got to be able to detect that. For that reason, Hammill sticks with 1 pound line even sometimes opting for 1/2-pound ice fishing line.

It’s not just which knot but where the knot connects

Of course with light line, anglers must tie a good knot and check it often. But more important is the position of your knot on your micro ice jig. If the knot it too far forward or back on the eyelet of the jig, the jig will not sit horizontally in the water, and that’s critical to a good presentation. Hammill checks his knot after every bite or fish to make sure the fish didn’t alter his presentation.

Hammill grew up using flashers but has since settled on portable sonar units to tell the whole story.

“I am looking for active fish,” he said. “Not just active fish, but I want to know where they came from and where they go after they go away from my bait. I get a lot more data and can interpret it immediately with sonar.  You can watch your sonar and see when bait and plankton move into the area and when the fish might turn on instantly. I also like to follow how the fish reacts to my lure on the screen. I call it video-game fishing.”

Hammill will try to “lift” the fish on his sonar, getting them to react and move with his bait. The more he sees them move on the screen, the more he finds active biting crappie

Making them bite changes from hour to hour

Sometimes the lighter lures entice the fish better with an ultra slow fall. Sometimes you have to constantly work the jig in one place in the water column to get them biting. Hammill calls it pounding where he’s just saturating a certain level in the water column with constant movement of his offering. Other times a quick move of 3 or 4 inches and the fish will respond. It can change hourly or daily.

To make his offering more enticing, Hammill adds “spikes” or euro larvae to the hook of his jig. A small jighead and 1 or 2 spikes on the hook can be more than curious ice crappie can stand. 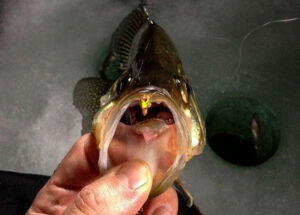 The key is detecting the bites

“I firmly believe many anglers are getting bit and never know it,” Hammill said.

When ice fishing crappie, they don’t grab it and run. The ease up to it slowly, stare and decide. Then they simply pull water slowly through their gills and the lure slides into their mouth. Because there is so little movement, bites can be extremely difficult to detect.

Hammill uses a custom made spring bobber with a chartreuse bead so that he can see it easily against the glow of his heaters and electronics. The line runs through the spring into the bead and down to the lure. He fixates on the bead, and if the bead rises or lowers, he immediately sets the hook into a crappie.

It’s an extremely focused way to fish. It’s not kick back, watch TV and wait for a bite. You’ve got to study the spring bobber for the slightest movement. Sometimes they suck the jigs in from such a close distance that you just see the line tighten and the bobber doesn’t even quiver. But the rewards to patient perception can be many when ice fishing crappie with ultralight gear.