An ice covered lake epitomizes ice fishing stability; the cold, thick ice sheet cutting the icy underwater world off from the chaos that constitutes northern winter. As most ice anglers know, that couldn’t be further from the truth. Seasonal, photoperiod and weather related changes affect the under-ice fishery in the same ways they do open water.

That said, most winter variability hinges on the fish, not the waterbody because level, temperature and oxygen levels remain pretty consistent under the ice. Consider what happens if the water body was constantly changing?

Lakes aren’t the only bodies of water that carry safe, fishable ice in the winter. Big rivers like the Mississippi, Niagara, and Rainy also get safe ice, and produce some of the best catches of panfish you’ll see anywhere in the country.

The Upper Mississippi River stretching from Northern Iowa up into Wisconsin and Minnesota is by many accounts the crown jewel of river ice fishing. Its fertile waters produce crappies, perch and bluegill in numbers and size seldom matched.

Local ace Brett Weber has been ice fishing the Upper Mississippi for more than 25 years, and he bears testament to how productive the fishing can be for adventurous ice anglers.

As any introductory fisheries biology class will teach you, the productivity of a waterbody is directly related to its size, forage base and recruitment. The Upper Mississippi has them all in spades.

Pools 3 through 11 average 18,000-plus acres each and are loaded with forage options, including zooplankton, minnows, insect larvae and various other aquatic invertebrates for the panfish to gorge themselves. There is also abundant vegetation, shallow cover and hard bottom to support healthy spawns for all three predominant panfish species.

The combination of these factors makes the Upper Mississippi not only a numbers destination, but also a destination for anglers looking to catch trophies.
“I think a lot of anglers don’t really understand how good the ice fishing is out here,” Weber said. “Just a couple years ago, the Iowa State record for perch was caught out of pool 11, and I’m certain that more records will be broken in the future.” 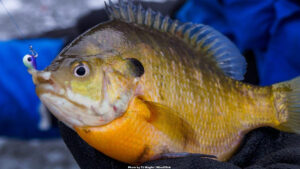 A lot of anglers don’t think of rivers as safe places to ice fish, and in general, they’re not. However, rivers as big as the Mississippi have an abundance of backwaters, sloughs, and bays that not only get safe ice, but are also easily accessible to ice anglers.

“The key is to find areas that have minimal current and enough depth to support a healthy forage base.” Weber said. “The lack of current is key for safe ice, but it’s also important for providing preferential locations for panfish to reside. Bluegill and crappie in particular are not built to fight current, so they winter in areas that don’t have much current.”

Having a healthy forage base is the second part of the equation, but it’s also the most important. If there’s nothing there to eat, then it’s unlikely you’ll find many fish hanging out in a particular spot.

“I like to think of the water as the fish’s house, and areas with good forage possibilities are like the kitchen.” Weber said. “In the winter, fish aren’t willing or able to move long distances, so they need to set up in the kitchen.”

One of the best ways to find areas with good forage base is to look for healthy vegetation. Healthy vegetation equals good oxygen levels and it also creates cover that supports all the forage organisms that panfish feed on.

“If you can find an area with reasonably healthy vegetation and some depth to it I can almost guarantee you that you’ll also find panfish. They may move around as the vegetation dies back later in the winter, but while it’s there, they will be too.” Weber said.

Ice fishing a river system like the Upper Mississippi usually involves long walks (much of it is inaccessible by truck and ATV) and the conditions are constantly changing. Because of that, Weber advised anglers should always think 1) simple, 2) slow and 3) small when selecting a presentation.

“Simple is more important on the river than anywhere else,” Weber said. “I’ve usually got to carry all my gear on my back, so just a couple good rods always trump a big heavy sled. I also use low-maintenance inline reels and no-knot Fas-snaps to easily change baits in the cold.”

Slow is important because the water is cold and it is a huge misconception that an exaggerated jigging motion catches more fish.

“More often than not river panfish respond better to a presentation that is barely moving,” Weber said. “There are even days when a dead-stick rod with a minnow will out-fish any jigging presentation.”

“Small is important because you need to match the hatch,” Weber said. “Offering a bluegill 4 inches of nightcrawler threaded on a No. 7 gold hook in January is like us eating fresh Morels in the winter. It’s just not natural. Presentations need to mimic the daphnia, small zooplankton and invertebrates that the panfish are feeding on this time of year.”

To match the hatch, Weber relies on a variety of small jigs and spoons, tipped with either live bait or more recently with plastics. Old standby’s like the Custom Jigs and Spins Mini Mert and Lil Cecil work great, along with tungsten jigs tipped with plastics like those made by B-Y Baits.

“Plastics are something I’ve really been getting into hard these last couple years,” Weber said. “A lot of times a jig and plastic will catch just as many fish as bait, and often they are the bigger ones. I think I used live bait only a handful of times last season.” 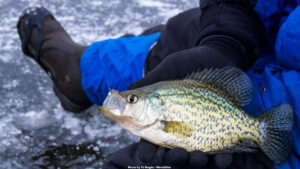 Be flexible â€“ It’s a good idea to come up with a game plan before a day ice fishing the Upper Mississippi, but don’t get too locked in. Because it’s such a dynamic system, your plan to chase perch at the mouth of a slough may fizzle quickly. By staying flexible, you may be able to move up into the slough and hammer bluegills on the weed line.

Stay mobile â€“ On river systems, you’ll have much better success by staying mobile than sitting in a shack all day. Hole hopping allows you to stay on the fish as they move throughout an area. Also, don’t be afraid to pack it up and try a different spot altogether if the bite is tough.

Selective Harvest â€“ Even on a body of water as big as the Mississippi, the effects of overharvest can be felt. It’s tempting to think of the fish resources as a never ending supply, but the reality is that the fisheries can actually be even more vulnerable in the winter. A huge proportion of the fish hang out in certain wintering spots making it easy to put a dent in a population. Weber practices selective harvest, and recommends others do as well.

Crappies over 13 inches, perch over 12 inches, and bluegill over 9 inches all go back down the hole. Those are your predominant breeding stock, and they need to be protected. He also seldom takes home more than 12 fish, since that’s plenty to feed his family of four. Not to mention you can enjoy many days of fun ice fishing if you doesn’t decimate the population in one or two trips.